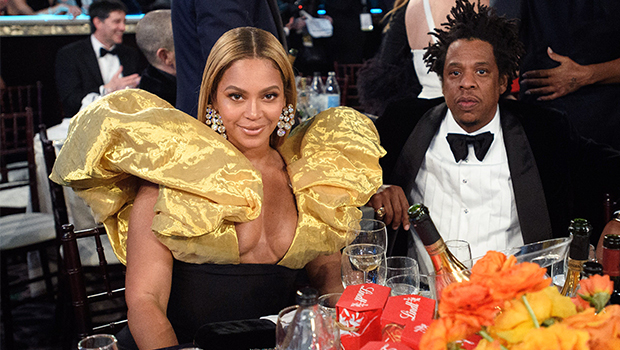 The Joker beat all four kings at the 77th Golden Globes. Joaquin Phoenix’s portrayal of Arthur Fleck (aka the title character of 2019’s Joker) beat Christian Bale, Antonio Banderas, Adam Driver, and Jonathan Pryce to win the award for Best Actor in A Motion Picture – Drama. It was a surprising victory, and everyone attending the Jan. 5 event at the Beverly Hills Hilton rose to their feet in appreciation of Joaquin…except for Beyonce. Bey, 38, stayed seated as Joaquin, 45, walked by, which drew ire from her haters who called the move “pretty rude.” However, when the Beyhive heard their queen was under attack, they fell into formation.

“Joaquin Phoenix winning for Joker and receiving a standing ovation from everyone… except Beyonce. Love.” “Beyoncé only accepts standing ovations, she does not GIVE them. (Love my boi Joaquin doe)” “I appreciate Beyoncé for not standing up for Joaquin’s win.” “In Beyonce’s defense, f*ck Joaquin Phoenix.” “I swear to God if it was a man who didn’t stand up for Joaquin Phoenix y’all wouldn’t say shit. And it’s not like Beyoncé was in the same category with him so what she got to be mad about?? #goldenglobes the way she made a headline out of sitting down. Her POWER.” 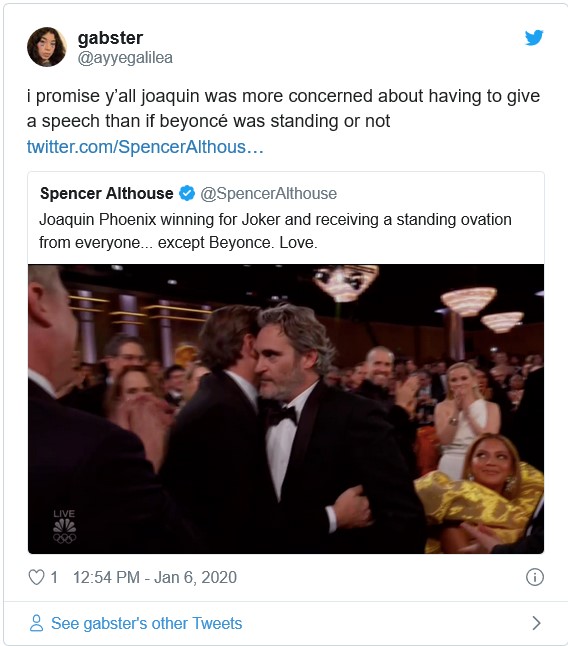 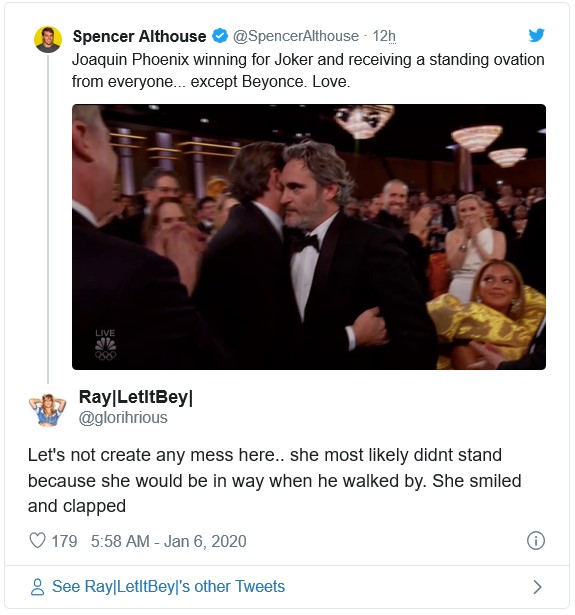 However, between the criticism and the support, some users seemed to stumble on the reason why Beyonce didn’t stand: she would have caused a scene. The puffy gold sleeves on her form-fitting dress, while a dramatic statement, aren’t the most aerodynamic. “Let’s not create any mess here. She most likely didn’t stand because she would be in the way when he walked by. She smiled and clapped,” one user tweeted.

“Just putting it out there. MAYBE Beyoncé didn’t stand during Joaquin Phoenix’s standing ovation because her dress was massive & would have been a pain to get out of her chair with and then gather it to sit down again,” another added.

Beyonce and JAY-Z arrived (fashionably) late to the show, bringing their own champagne to the star-studded affair. She was actually nominated for Best Original Song in a Motion Picture for her song “Spirit” (co-written by Beyonce, Timothy McKenzie, and Ilya Salmanzadeh) from The Lion King. The award went to a different queen, as Elton John and Bernie Taupin won for “(I’m Gonna) Love Me Again” from Rocketman.