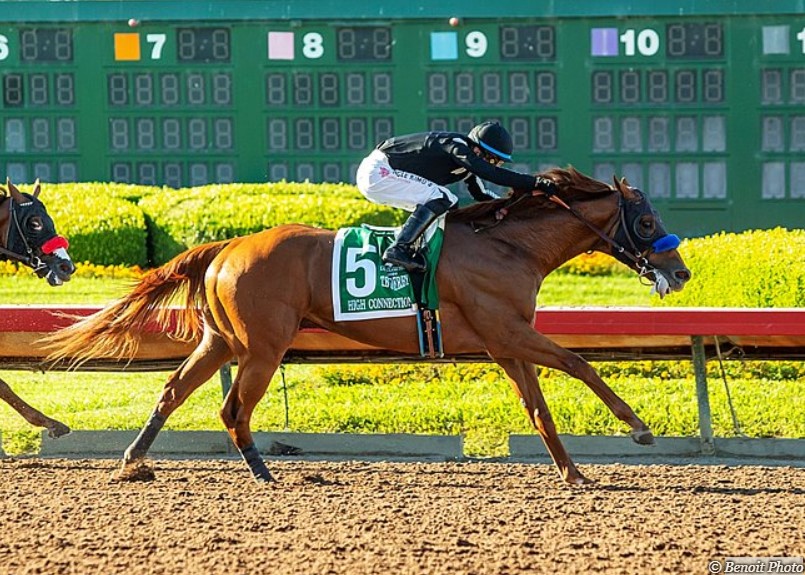 As comebacks go, Bob Baffert couldn’t have asked for a better one than to win the $125,000 Los Alamitos Derby July 9 with High Connection .Dr. Ed Allred, owner of Los Alamitos Race Course, presented the trophy to Baffert, who recalled how many decades the two have known each other.

“He gave me my first job, out of high school,” said Baffert. “In ’71—they call it a gap year now—I went to work for him. He put me on some horses. I wanted to be a jockey. I worked at his ranch. We go way back.”

Baffert was returning to the racetrack after serving a 90-day suspension, and he saddled two of the five entrants in the Los Alamitos Derby, High Connection and Doppelganger . The trainer has won this race a record 12 times, including when it was the Swaps Stakes at Hollywood Park and in each of the past six years at Los Alamitos.

Slow Down Andy , who captured last year’s Los Alamitos Futurity( G2), was trying to become the first horse ever to take the Futurity and Derby. Bettors made him the even-money favorite in his first race since March over High Connection at 8-5.

Those two turned the 1 1/8 miles into a match race. They set off against each other right when the starting gate opened and kept exchanging the lead for the entire race.

Slow Down Andy put his head in front early and was responsible for the first quarter-mile fraction of :22.46. Then it was High Connection’s turn to grab the lead, covering a half-mile in :46.48. Next came the six-furlong mark of 1:10.58, which went Slow Down Andy’s way.

The two colts kept battling into the stretch. Slow Down Andy, who has raced erratically in the past, veered toward the rail, while High Connection kept running straight toward the wire for jockey Juan Hernandez. Approaching the finish, High Connection finally put away Slow Down Andy, pulling clear by 1 3/4 lengths in 1:48.98. It was four lengths back to third-place Win the Day , followed by Doppelganger and Got Thunder .

“This horse, when he broke his maiden, I really thought it was impressive,” said Baffert. “Then he sort of fell back and we weren’t sure how far he wanted to go. These two were the first horses I worked Sunday. They worked really well. This horse, I could tell in the paddock (that) he was ready. Juan said he brought his A-game today, and he needed it because Slow Down Andy was tough and relentless.”

Baffert trains High Connection for HRH Prince Sultan Bin Mishal Al Saud. The colt made his first start for Baffert and then was turned over to trainer Sean McCarthy during Baffert’s suspension. While in McCarthy’s care, High Connection ran second in an optional claiming allowance event and in the Affirmed Stakes (G3).

G. Watts Humphrey Jr. bred High Connection, a son of Connect  —Forest Legend , by Forest Camp , in Kentucky. The mare, the dam of four winners from five to race, was sent from the United States to Turkey last year. Her youngest produce is a Tonalist yearling filly.

High Connection went through two sales, first in the 2020 Keeneland September Yearling Sale in the Lane’s End consignment. Becky Thomas bought him for $75,000 and pinhooked him into the Ocala Breeders’ Sale Company’s March Sale in 2021 in the name of her Sequel Bloodstock. There, Narvick International purchased High Connection for $290,000.