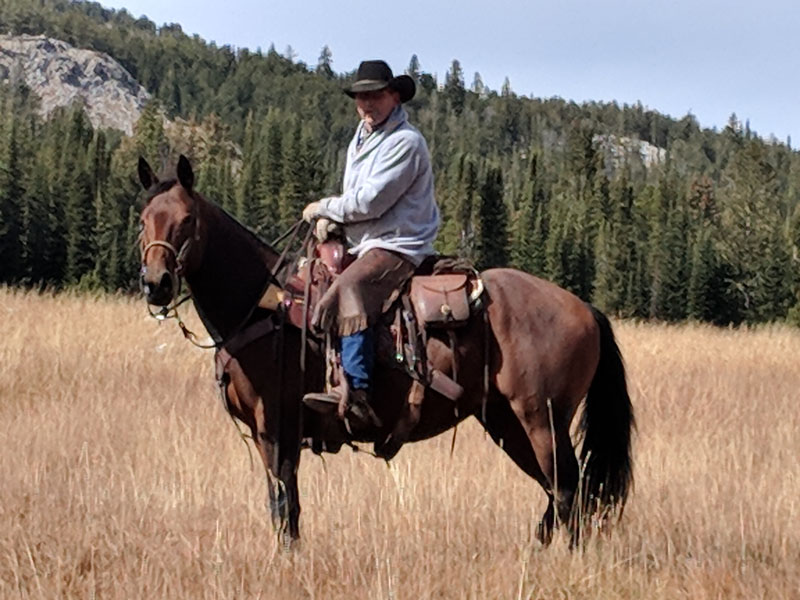 Back From The Brink: Kilkenny Cairo Heals At Her Home On The Range

In June Gayl Russell thought she’d finally turned a corner with her mare Kilkenny Cairo in the spring of 2019. After nearly two years of unconventional cross training, the skittish and reactive Dutch Warmblood was beginning to behave like a solid citizen.

“Cairo” had a reputation as a fearful horse with a buck before Russell bought her. Her trainers used to joke that the mare was scared of her own breath. Russell, of Wise River, Montana, hoped a change of scenery might improve her outlook on life.

Since 2017, Russell and her husband, Steve Wildeman, have spent their summers tending to cattle out on summer pasture in the Pioneer Mountains in Montana. From mid-June until mid-October, Cairo lived in a 30-acre pasture with the other cow horses and worked as a stock horse, while Russell and her husband stayed in a rustic cabin with no phone, electricity or running water.

“My husband rides Cairo and packs his rifle and bull whip,” says Russell. “It is a cow camp situation out in the middle of nowhere, and the horses are across a Forest Service access road. Cairo runs with the cow horses, and she sometimes fancies that she’s the lead mare.”

After two summers of stock horse work, Russell decided the mare’s mental focus and confidence had improved enough to return to the show ring. She shipped Cairo (Joram—Mirage Of Overlook) to the Let’s Show Beach Party at Brookside Equestrian Park in Elk Grove, California. There, Cairo exceeded Russell’s expectations, earning good ribbons in the adult jumpers.

Before heading home, Russell picked up two horses for her friend Jessie Sinclair. A professional long-distance hauler and semi-truck driver whose credentials include driving the ice road in Alaska, Russell had no qualms about the long journey ahead of her.

On June 12, Russell was making good time. It was about 3:30 in the afternoon; the weather was perfect, bright sun and clear roads. She was riding Interstate 15 over the Malad Summit, crossing from Utah into Idaho, and was nearing the bottom of its long, straight descent when suddenly her cab was lifted off its drivers and slammed back down so hard she thought she’d blown her transmission. Russell looked out the window and saw debris flying out of the right side of her trailer. She feared she’d blown a tire. But nothing could prepare her for the reality of what actually happened.

“I stopped and ran out, and I couldn’t believe what I was seeing,” says Russell. “Your mind doesn’t really accept there is a vehicle in your trailer.”

A distracted driver, traveling over 80 miles per hour, had slammed his Jeep Patriot into the back door of Russell’s four-horse gooseneck. The midsized SUV was completely within the body of the trailer, having smashed through the door and tack room and continued directly into the horses.

Russell opened the back hatch of the vehicle and tentatively called to the driver. Despite the intensity of the crash, he crawled out of the tailgate with nothing more than a few cuts on his right hand, which was still holding his cell phone. He was later charged with and pled guilty to inattentive driving and received a $5,000 fine. A passing equestrian stopped just before the emergency crew arrived. They all began working to remove the SUV from the trailer.

The impact “bowed the trailer like a pregnant sow,” says Russell. Sinclair’s buckskin mare Sienna, who had been riding in the fourth stall and was closest to the main impact, sustained severe injuries necessitating euthanasia. Sinclair’s other horse was thrown onto the SUV’s hood, sliding under a stall divider. Though panicked and bleeding, her injuries weren’t life threatening. Cairo occupied the second stall, as Russell used the first to store extra supplies. The crash threw the mare into the living quarters bathroom. A stall divider pinned her crumpled body in place. Cairo’s hind legs were near the car’s motor; its fan blades sheared her hoof wall.

Before they fully extracted her from the wreck, Cairo tried to escape through one of the trailer’s drop-down windows, lacerating her face. Her legs and back were covered with cuts, but most troubling was that she wouldn’t walk straight and stood disconsolately with her back hunched up once they freed her. She was trickling urine, and when veterinarian Seth Lundquist, DVM, arrived on scene, he was concerned she had severe internal injuries. He administered pain medicine but looked Russell straight in the eye as the mare was loaded onto a trailer bound for Alpine Animal Hospital, in Chubbuck, Idaho.

“He wanted me to give someone authorization to have her euthanized if she needed it,” says Russell. “I told him to call me. And he says, ‘I want you to know….’ ”

Russell cut him off. She could tell Cairo’s condition was serious, but every time she walked by, the mare nickered to her.

“The cops are wanting me to fill out papers, and I wanted to go stand by my horse,” says Russell. “I figured she was gone. I’ve seen some horses hurt, and hurt bad—and this horse was not good.”

After everything they’d been through, Russell wanted to give Cairo a chance. Veterinarians performed an abdominal ultrasound, but it was inconclusive. Russell opted to leave her there overnight, where the staff kept close watch. The next morning, Lundquist called with good news.

“He said she ate a little bit of her hay,” says Russell. “She was still humped up and still had urine dribbling out but not as bad. And I thought, ‘You know what? She might make it.’ ”

Two days post-accident, Cairo was released from the veterinary hospital. Russell’s brother-in-law came with a stock horse trailer to bring her home. Since it was time for them to report for range duty the next day, Russell decided to bring Cairo along to keep an eye on her.

Russell had no idea if her horse would ever be rideable again. The accident left Cairo with shattered splint bones on her right hind leg. As the summer wore on, an additional complication developed. Abscesses kept forming on Cairo’s left front cannon bone. They opened and pus drained out, only to recur in close to the same location. Soon, the hair stopped growing back, and a large lump remained. X-rays revealed that the lumps were sequestrums, small pieces of dead bone separated from healthy tissue. Surgical removal was possible, but the veterinary surgeons were concerned that the fragments’ proximity to the tendons meant a high risk of permanent lameness. Russell opted to stick with simple medicine and to tend to the mare herself.

“I would put a poultice on them and wrap them up,” says Russell. “Eventually two pieces of bone fragment came out of her leg. She still has one piece in there that has not come out yet.”

As summer turned to fall, and Russell and her husband prepared to leave the range for their new home in Waterloo, Montana (a town so small it doesn’t even have a post office), Cairo seemed ready to go back to work.

“We didn’t start her back until after we came off the range in October,” says Russell. “I just realized that she had healed up as much as she was going to, physically. But I needed to know, in my own mind, if she could handle the psychological end of it, or if she would regress to what she had been.” In early December, Russell sent in her entries for several jumper classes at the National Western Stock Show in Denver. In hindsight, Russell admits that the electric environment of the busy indoor venue—the show draws over 100,000 spectators and features other livestock besides horses—was, perhaps, not the best venue for Cairo’s debut. Though unsettled by the atmosphere at first, each day, the mare seemed to get a little better. But the biggest challenge of the weekend for Cairo was Russell’s new white slant load; since the accident, Cairo had only hauled in open stock trailers. At first, the mare just stood and trembled at the sight of it, showing the whites of her eyes. Loading her initially “took a while,” according to Russell, but now she can loop the lead rope over the mare’s neck, and Cairo walks right on. It was this small victory that left Russell feeling that her talented horse may get a second chance in the competition arena after all.

“I will give her the summer, take her to the Montana schooling shows, try to get her out as much as I can,” says Russell. “It probably will take a little time, and we’ll just see how she does.”

Do you know a horse or rider who returned to the competition ring after what should have been a life-threatening or career-ending injury or illness? Email Kimberly at kloushin@coth.com with their story.