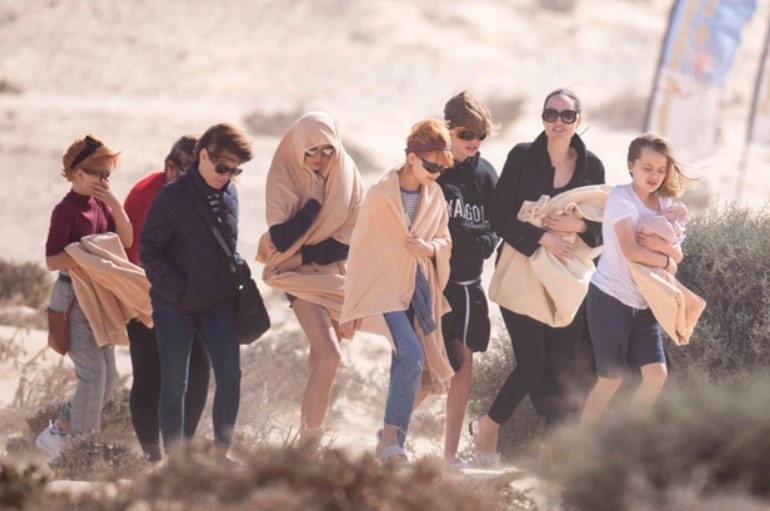 What a gathering! Angelina Jolie, 44, enjoyed some down time with her kids Shiloh, 13, Zahara, 14, & twins Knox and Vivienne, 10, while taking a break from filming the upcoming Marvel flick The Eternals on Nov. 9. The Oscar winner and her brood were spotted hitting the beach in the Canary Islands with her Eternals costar Lia McHugh, 12, where everyone involved bundled up for a very windy day out. Angelina looked absolutely stunning in an all-black outfit and silver-toned sandals while accessorizing her beach look with a pair of stunner shades. She and many others carried around a cream-colored blanket during the outdoors excursion where everyone involved appeared to be having a fun time.

Oh no! Zahara, who sported a gorgeous white top and brown shorts with her siblings and mother, made a funny face when she was hit with a gust of wind! Lia, on the other hand, was all smiles while chatting with Shiloh, who donned an oversized Kangol sweatshirt and hat for the overseas extravaganza. Angelina was also spotted with a big grin on her face, but who could blame her when she’s got her kids with her in a place that looks like absolute paradise!

Angelina was previously spotted wearing a tight gold suit and blonde wig while filming The Eternals on Nov. 8. The upcoming movie, which costars Salma Hayek, 53, and Game of Thrones hunk Kit Harington, 32, is expected to be released domestically in November 2020.

The Girl, Interrupted star shares Shiloh, Zahara, Knox and Vivienne as well as sons Maddox, 18, and Pax, 15, with ex-husband Brad Pitt, 55. Something she thrives on is allowing each of their kids to express who they are individually when it comes to their eclectic fashions.

She talked about her parenting insights in the December/January issues of Harpers Bazaar, saying that living boldly and freeing means having “the ability to encourage my children to explore the world, including the world of ideas and expression, without there being limits to what they are allowed to study or know or imagine themselves doing in the future.”