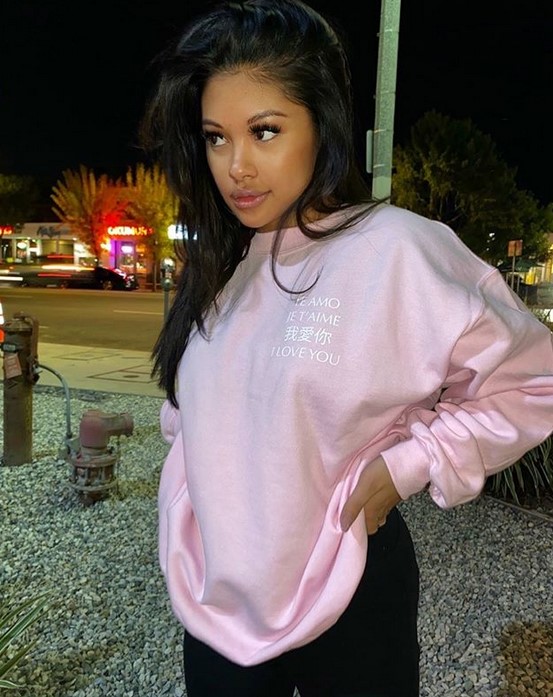 Ammika Harris has been showing off her post-baby body on social media in the weeks since she gave birth to Chris Brown’s son, but she has insecurities just like anyone else! In a recent Instagram pic, Ammika lifted up her sweatshirt and revealed her thin waist, and fans raved over how incredible she looked. “You are so beautiful and so positive!” one person gushed. “I have two little girls and am motivated by you to get my mom bod back!!!!!! Thank you or keeping positive vibes in the world!!!!!”

Ammika doesn’t interact in the comment section that often on her page, but she did take the time to respond to this message. “Give it time love!” she wrote back. “I still have a little belly and far from where I want my body to be.” Ammika gave birth to her son, Aeko Brown, on Nov. 20, so it’s been just shy of a month since she became a new mother. For the most part, she’s been keeping a very low profile since Aeko was born.

In fact, she and Chris didn’t even confirm the birth themselves until Dec. 11, when they shared the first photos of Aeko’s foot in the hospital. Then, on Dec. 14, they revealed a first look at the newborn’s face. Of course, he’s too cute for words! “Can’t help but falling in love with you,” Ammika captioned her photo of the little guy. Aw!

One thing that’s still unclear, though, is the status of Chris and Ammika’s relationship. The two have never actually confirmed whether or not they’re a couple, and over the weekend, Chris was photographed hanging out with model Jasmine Sanders. For now, though, it seems like they are getting along amicably as co-parents.