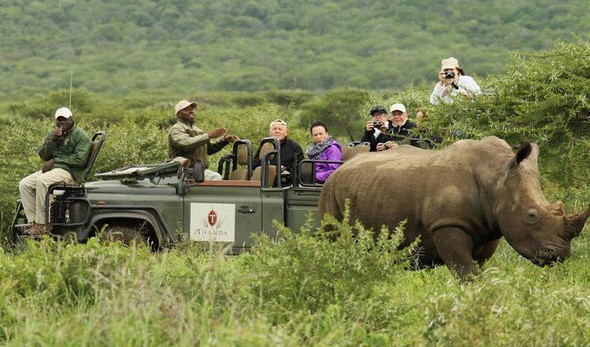 A wildlife heaven in KwaZulu-Natal

SOUTH Africa: We think of majestic Table Mountain. Nelson Mandela. Cape Town’s dramatic beaches. Wine regions. Coastal drives alongside crashing surf. Most lovers of South Africa have ticked all of these boxes. What they may not have done, or quite possibly not even contemplated, is to discover the Zulu heartland of KwaZulu-Natal. In Zulu this expansive wild bushland is called Heaven, an apt description of the wild, rolling mountains, swathed in eucalyptus trees introduced from Australia and ornamental African acacia trees, common to the savannah.

Mix that with a dramatic unspoilt coastline, home to prolific wildlife, and you’ve got a heady recipe for an ultimate African adventure. The province’s capital Durban itself, sadly, is somewhat faded, yet not without spirit. It’s seen better days with the once grand colonial buildings, surrounded by wrought-iron verandahs, in need of some serious loving. Squares lined with historic landmarks such as the neo-baroque City Hall built in 1910, with columns reaching to the heavens, crowned by a massive US Capitol-style dome depict a once prosperous society.

Durban’s distinctive solid Cape Malay houses with thick walls and stable doors, alongside British-style churches, follow suit. Nearby is the Old Courthouse Museum, a plain, solid stone building where Mahatma Gandhi practised as a lawyer. He was to stay in South Africa for more than 20 years. It’s not difficult to imagine him sheltering from the midday sun, resplendent in a threepiece tweed suit. The city’s pavements are bustling with people selling their fresh produce and clothing. Nearby, Central Victoria Market has sky-high pyramids of bright spices and tobacco leaves, alongside more tourist-oriented stalls offering baskets, carved hippos, wooden bowls and colourful beaded jewellery.

In 1820 the British arrived in KwaZulu-Natal, establishing a trade port, but the Zulus were so self sufficient they didn’t need the work. Instead the British looked across to India for workers and recruited hundreds, luring them to Africa with five-year guaranteed contracts. Sadly, for most, after the contract period had passed they couldn’t afford to return home. It wasn’t until 1994 that they were finally made African citizens, with many today having prominent positions in business and politics. Now it has the largest Indian population outside of India.

Capetonians have cottoned on to Durban’s natural attributes, descending on the city for the weekend to swim in the warm Indian Ocean. There’s still an element of the black/white divide with obvious signs of the disparity still visible, particularly in the gated Zimbali Coastal Estate where villas are tucked away in dense planting. But the estate is also home to the award-winning Fairmont Zimbali hotel where we stayed. Overlooking the crashing surf, it boasts a vast pool, sublime service and some of the best beaches for swimming in Durban. However, there’s no time to dip our toes in, as we’re up early heading north through sugar cane plantations, into Zulu territory.

Driven by the effervescent Thoko Jili, whose arms and neck are adorned with colourful beaded Zulu jewellery, she effuses about her culture saying she’s one of 13 children. “My mother was a good laying hen,” she explained. She also tells us that in Zulu culture boys aged 16-18 from Nelson Mandela’s tribe, Xhosa, are sent away the mountains for six weeks to be circumcised, before returning as men.

We punctuate the three-hour journey at iSimangaliso Wetland Park where we take a leisurely river cruise. Guaranteed sightings of hippos generated a palpable level of excitement as we gently plied the muddy brown waters.  Fortunately for us, hippos find it difficult to hide and within minutes our phones are out, frantically snapping a pod of 25 who are all but out of the water and sunbathing on the banks. Our excitement was still obvious when we arrived at Thanda Private Game Reserve, backed by the Lombombo mountains, which extend 500 miles to Mozambique and Swaziland.

The late afternoon sun was casting a beautiful hazy pale golden light over the rich terracotta soil tracks and towering eucalyptus trees. Within minutes of transferring to our Jeep, our brilliant guide Buse is warning us to keep arms inside the confines of the vehicle as we clock our first sighting; a big, milk-chocolate coloured Rhino and her calf, wandering the open savannah plains. The “grand daddy” of Thanda’s guides, Winneth is sitting out on a single seat jutting out over the bonnet, his eyes darting, searching for anything that moves. Beyond, a handful of zebra graze on the verdant rise. A little further along the track we come alarmingly close to a massive adult bull elephant.

He appears totally oblivious to us, reassuringly more focused on levelling the top of a thicket tree. Game drives can be hit and miss. However, if this was an indication of the level of sightings at Thanda, we were in for a cracker of a stay. Many shun South Africa’s game reserves, perhaps heading for Kenya – which is far too much like a theme park – or Botswana and Tanzania. However, just three hours from Durban, you will have 15,000 hectares virtually to yourself. Just you and the Big Five. We stay at the Thanda Safari Lodge in one of the nine plush individual lodges designed to look like traditional Zulu houses with thatched roofs, private plunge pools and separate lounges, decorated with beautiful locally-made wire baskets, throws and African artworks. There was the option of a nearby tented camp offering the more traditional colonial take on a safari, with 15 tents dotted over rolling hills. For blowing the budget, you can rent the entire Villa iZulu from Thanda’s Swedish owners, Christin and Dan Olofsson. It comes complete with sprawling gardens, homely living spaces with roaring fireplaces, a grand piano and five bedrooms.

Thanda isn’t all about the game viewing. It’s also about giving back and making a difference. Visiting a local Zulu community was a highlight. Set on a hilltop, with views worthy of a Constable landscape, is a cluster of rondavels houses dotted across the red dirt and painted in bright blues and greens.

They are home to half-a-dozen families. We sat inside on rattan mats on a spotless tiled floor chatting, via an interpreter, to the head of the village and his wife about their uncomplicated lives. The wife is a Sangoma – a traditional healer – and she explained that from this room she calls on her ancestors to help heal and support community members in need. Life for the families is basic but more importantly, free. They can have as many livestock as they desire, educate their children and entertain tourists like us.

Preserving traditions and conservation is key to Thanda’s raison d’être. They run a very efficient anti-poaching unit, patrolling by plane, Jeep and on foot, even using tracker dogs. The exact numbers of the rhino population is such a closely guarded secret not even the guides know how many exist here. Protection is paramount due to the world’s dwindling population, with only 6,000 black rhinos left in existence. Some of them still roam happily alongside the abundance of wildlife that flourishes in this glorious, varied terrain. After the first few sightings of kudu, impala, even giraffe and hippos wallowing in shallow mud pools, it’s easy to become slightly blasé. On the second morning, in an almost hidden valley, we found a kill. Buse parked up so close that we could see the two female lions and their cubs tearing apart a baby giraffe’s insides. We watched silently as nature in all its gory glory, played out before us.