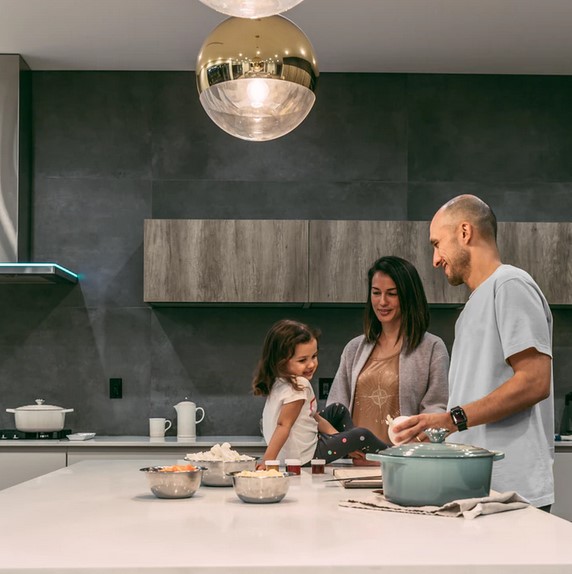 We Are a Family with Anxiety

I’d been go-go-go all my life, but when my preschooler was struggling to cope, I finally realized I had to slow down.

I’d always known that my 6-year-old daughter, Lilly, had strong opinions—she started voicing them at 22 months and hasn’t let up. She’d also had some obsessive-compulsive tendencies: Her many books had to be precisely stacked and her stuffed animals arranged just so. She refused to have her hair touched and was very particular about how her clothing felt. But it wasn’t until last year that I finally realized that anxiety was at the root of all those symptoms.

One night, after I’d tucked her into bed, she called me back into her room. Lilly was frantic, tugging at my top, clinging to my neck, her damp cheek against mine as she rattled off a list of items she’d no longer wear or eat at preschool. Dark clothes and jeans? Never again. Ponytail? Absolutely not. Crunchy foods? Forget it.

It escalated from there. If she spotted a speck of navy blue on a bright-pink dress, she’d dissolve into hysterics, refusing to wear it. She’d often cry the entire way to school, avoid eye contact with friends, cower in the corner, and beg me not to leave. My sweet, sunny girl who used to skip to school was unrecognizable.

Then we hosted a playdate that ended in disaster. She refused to share her toys, and I came down on her pretty hard, triggering her first panic attack. While she hyperventilated, I tried to get her to breathe, counting slowly while praying silent, desperate pleas that she’d be okay and that I had what it took to help her.

Eventually, she told me what had happened. A boy had called her a loser on a day when she was wearing a dark-gray sweater and jeans, had her hair in a ponytail, and ate carrots and apples for snack. This single event was the tipping point for preexisting anxiety stemming from various life changes: moving from the city to the suburbs, going to a new school, and becoming a big sister. The new rules she’d created were an attempt to control her world and feel safe again.

My heart broke for her. And like any mother does when her child is in pain, I wondered, why her, why this, why us?

I didn’t have to look far for my answer. My husband, Zach, has always been a nervous guy. When we first met, he was noticeably neurotic about arriving at places on time and about what he was wearing, and he’d ask the same questions ad nauseam. I even remember thinking, “If he’d just relax a little, he’d make an amazing husband and father.”

Well, 13 years later, I can say I was wrong about the downsides of anxiety. In fact, a big part of what makes him an incredible provider, caretaker, and companion is his overactive mind. Zach is always thinking one step ahead, and he keeps our family functioning. He’s the one who makes sure that the kids’ medicine hasn’t expired, there’s toilet paper on the roll, and our pantry is stocked with the essentials. I’m the fun one who tricks out the house for all the holidays, coordinates themed outfits for every occasion, and plans elaborate adventures. He makes sure we have the gas to get there and that the lights and heat are on when we return home, weary from our travels.

After our ordeal with Lilly, Zach’s mom told me he’d had a similar spell when he was her age. Over the years, he has learned to soothe his nerves. When he has a presentation, he is super-prepared. He goes to bed early, exercises to burn off aggression, and takes the occasional Xanax. Mostly, he talks to me about his feelings, and I’m embarrassed by how ignorant I once was. I didn’t know that telling someone to “calm down” isn’t helpful or realistic. Now I listen and resist the urge to respond right away. I empathize, as well—especially lately.

That’s because as I was researching Lilly’s condition, I realized for the first time that I have anxiety too. What I’d always assumed was simply my personality—I’m sensitive, perfectionistic, and hard on myself—turned out to be clues that I’d been suppressing this serious problem for more than 20 years.

One of the ways my anxiety manifests itself is that I get really nervous and awkward in both new and familiar social settings. Whether it’s hanging out at the school playground or pitching ideas at work meetings, these are situations I avoid whenever I can. When that’s not possible, I act confidently while internally attacking myself and later obsessing over everything I said and did.

Thanks to Lilly, I’m finally getting the help I deserve. I’ve started seeing a therapist and am figuring out what my triggers are and how best to manage my symptoms. I’m committed to doing the work for myself and my family

Looking back, I find it’s no surprise that my anxiety has spiked since I became a mother. The pressure to be a “good” mom while advancing my career fueled an already burning fire. Two close friends recently shared their own anxiety struggles with me. One is on the path to recovery, but the other is still in the darkest phase. I know the statistics are accurate: We are a society that is suffering. According to the National Institute of Mental Health, nearly 20 percent of Americans have anxiety, but only 37 percent of those affected ever seek help.

The epidemic won’t end if we don’t do something about it. So here’s my attempt. I have anxiety. We are a family with anxiety. We probably always will be. But we’re also focusing on all the good it brings us—thoughtfulness, compassion, and empathy. If those attributes are part of anxiety, too, we’ll make the best of it, and we’ll speak out about it. We’ll seek help and be the best versions of ourselves that we can be.