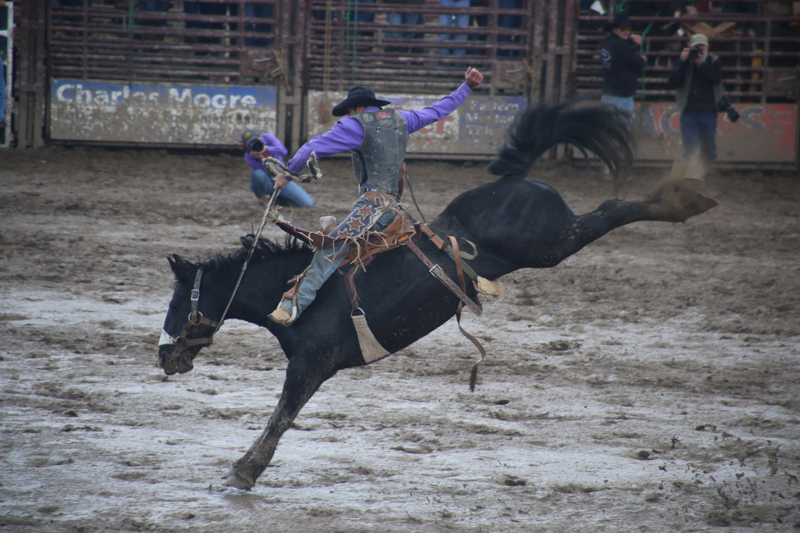 The Naked Foxhunter Places Her Bid At The Cowboy Mardi Gras

Our latest dispatch from the intrepid Naked Foxhunter finds her loading up and moving out to Reno, Nevada–with a washing machine in the slant load and a memorable stop at Montana’s World Famous Miles City Bucking Horse Sale along the way. I never thought I’d drive 2,000 miles to watch bikini bronc riding in the rain at midnight, but invitations to adventures with horsey friends often lead to strange places. That’s how I found myself part of a motley crew of riders trying to figure out how to push 200 cattle across hundreds of acres of Montana rangeland last May. All of us, except our host, were in English jumping saddles on our English-trained jumping horses. Most of us wore helmets and English riding boots, but a few wore cowboy hats and tall cowboy boots with our English tack. We looked like one of those informational posters of riding styles by Sam Savitt, but on scramble.

But the one thing we had in common was that we were foxhunters from all over the country–masters, huntsmen, whippers-in and field members from various hunts. Renee Mantle, MFH and huntsman for the Big Sky Hounds, had organized two weeks of riding, first in central Montana north of Bozeman, then hunting and trying our hand at cowboying in eastern Montana before capping the trip off with a visit to the World Famous Miles City Bucking Horse Sale.

Have Appliance, Will Travel

It all began when I decided early in 2019 to sell everything I owned and move from Knoxville, Tennessee to Reno, Nevada. Joining Renee’s adventures was sort of a warm-up detour along the way. It took me four days to drive from eastern Tennessee to about an hour north of Bozeman, Montana. When I pulled out of Knoxville I had my two horses, my dog and my cat. Oh, and my washing machine. What, doesn’t everyone drive 2,200 miles with a cat and a washing machine in the stallion stall of their three-horse slant load? Yeah, it looked as ridiculous as it sounds.

I brought the cat with me because I had no place to keep her in Tennessee without risking her being coyote bait. So, I turned a dog crate up on its end, made a hammock out of an old hay net, and put her litter box underneath. I think the dog was more stressed in the backseat than the cat was on her new throne. The washing machine was hauled to Bozeman because I planned to continue on to Reno in a few weeks. The plan was to transfer it to a Reno-bound rig when the Nevada crew went home from Montana. I brought it along to save room during my later move.

This multi-week trip was really a joint meet between the Big Sky Hounds and MFH Angela Murray’s Red Rock Hounds from Nevada, with a lot of hunters from other clubs across the country thrown in as a bonus. There were about 25 riders in total. The first day in Three Forks, Montana, at the Headwaters Ranch, home of the Big Sky kennels, we had a foxhunting clinic taught by the famous Lynn Lloyd, MFH, former huntsman and founder of the Red Rock Hounds. I didn’t want to pass up the opportunity to ride under the eye of Lynn. This was the first time I ever rode my new horse, Simba, whom my friend in an Alabama backyard and bought to train for me.

Despite being sure that I would be the entertainment for the day by flailing about with all the grace of a toddler on a trampoline, Simba and I did quite well together. I at least didn’t fall off, which is something. During our stay in Three Forks we had the all-day clinic, a hunt with the Big Sky foxhounds and a hunter pace/poker run. The hunt resulted in two fun runs on coyotes.

The next adventure Renee arranged for us was a day of cowboying. We trailed 40-odd cow/calf pairs up a steep canyon, heading them towards Christian author John L. Moore’s summer pasture gate that was somewhere on the top. We were in the saddle for most of the day just to find the cattle, and then we pushed them toward a reservoir and an elusive gate. We were a varied bunch. Rich Pye, a New Jersey transplant to Reno, was on his off-the-track Thoroughbred, and Tara Tibbetts, a native Montanan now living in Texas, was also on an off-the-track Thoroughbred. They were leading the cows up that long pull. The Californian, Mary Tiscornia, followed directly behind the last calf riding her imported European Warmblood that at one point was a fancy, high-level hunter derby show horse and as far as we knew had never seen a cow before in his life.

Behind Mary was the only Tennessean in the group, me, and I was riding my new horse that has some sort of gaited breed thrown in his Heinz 57 recipe and was a bovine mystery until we got close to that first cow without trouble. Next was Renee on one of her many dude horses, and along with Tara they were really the only ones of us who had any actual skill in moving cattle. To round out the group was high school senior and native Nevadan Belle Barkman on a former steeplechaser and Virginian Rosie Merle-Smith on her tall draft cross.

That day gathering cattle for Mr. Moore we were in the saddle for more than eight hours and covered about 24 miles. Mr. Moore’s ranch is many sections in size (my Southern self was educated that a section is about 640 acres), and we had to find his cattle in a single pasture that was 12 miles from fence line to fence line. Being from the South, this kind of vastness is mind-boggling and on multiple occasions my poor new horse was struck agog at the far-distant horizon unmarred by a single tree.

Fortunately, we did get all of Mr. Moore’s cows and calves moved through that gate and onto the summer pasture. We recovered by spending a day or two shopping in Bozeman, where my “y’alls” drew more notice than I expected, before we packed up our caravan to haul five hours east to Miles City, Montana. We kept the horses about 20 miles outside of Miles City at Terry Haughian’s ranch. Terry is a local town legend and a former professional saddle bronc rider. From Terry’s place, we hunted four days with the foxhounds from Big Sky and Red Rock, which resulted in one coyote being put to ground, one sandy and pale colored coyote running in front for us all to see, and one bobcat being chased up and down a large canyon. We hunted at three different ranches, each with massive views that define “Big Sky Country.”

Finally, after several days of hunting and cowboying in the sunshine, we put our horses away to clear up time for the World Famous Miles City Bucking Horse Sale. Just in time for winter to visit Montana–in May. Three days of rodeo. Three days of broken-in boots, championship belt buckles and really nice pick-up horses. Three days of pouring rain, sleet and finally snow in weapons-grade-material gumbo mud. Three days of sitting out in the open on metal bleachers while sharing plastic sheeting and blankets with any neighbor you could convince to snuggle in tight with you. Three days of drinking Montanan craft beer, Montana Mules with huckleberry vodka and Crown Royal doubles. And three days of losing spectacularly at poker and watching (for better and worse) bikini bull riding outside in the 40-degree-rain at midnight.

My friends, the World Famous Miles City Bucking Horse Sale ain’t called the Cowboy Mardi Gras for nothing. Many of the saddle bronc horses were auctioned off, and Renee had arranged for us to have an agent at the auction. There were about 20 of us willing to throw away–er–put money towards buying a good bucking horse. I was sitting next to Renee when we saw a huge blue roan come out of the chute. Renee immediately claimed him as the one we wanted. Lo and behold, we bought a bucking horse. He was named Red Rock Rumble, and we’ll get to follow his rodeo career. No, none of us will get a percentage of his future winnings. The name is the only thing we get for our money. Was it a silly thing to do? Fiscally irresponsible? Illogical? Just plain dumb? Yes to all of the above. Which is precisely why we wanted to do it. Everyone should, at some point, buy a bucking horse during a three-day drinking binge in the pouring, freezing rain while sloshing through gads of gumbo mud. Just so you can say, “We bought a bucking horse.” Because we supported some fellow equestrians, even if they looked a little different. We need to support each other, whether we ride in stock saddles or English saddles. Whether we jump all the jumps or rope the wayward calf. We need to help each other, ride with each other, teach and learn from each other so that we can survive this modern age.

Postscript: As 2020 begins, the Naked Foxhunter has settled into daily life in her trailer’s living quarters parked at Angela Murray’s ranch just outside Reno. Red Rock Rumble has bucked in a few rodeos since Miles City, but he has the winter off now.