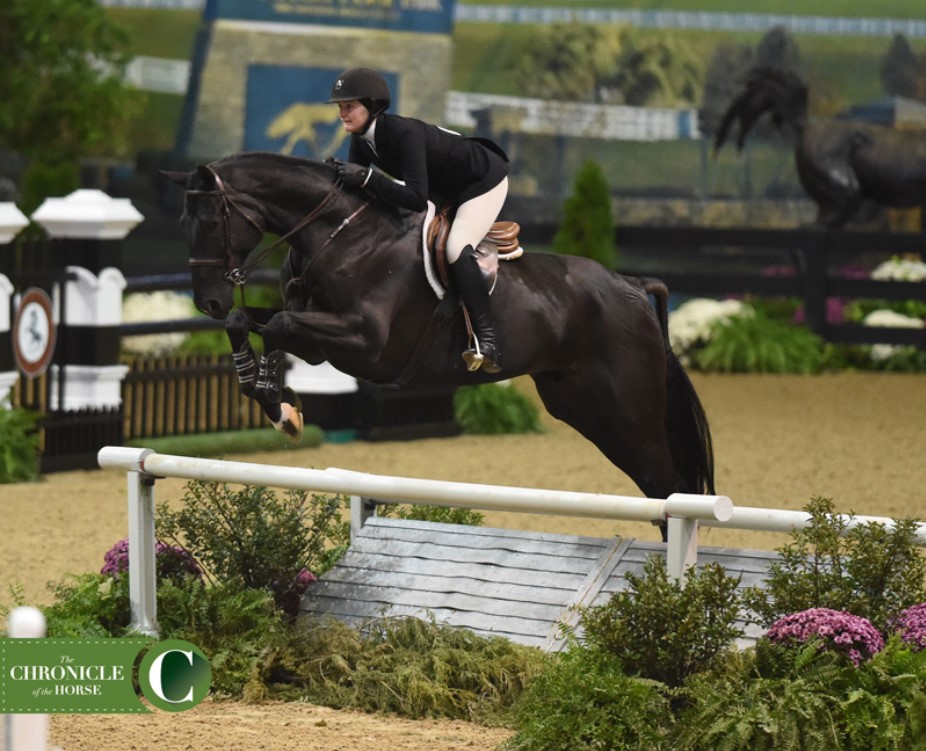 It was a subtle change. A curtain up on the concourse of the Alltech Arena was opened, and a stream of light came flooding in. Most wouldn’t notice it. It didn’t get noticeably brighter in the ring, and the patch of sunlight that landed on the arena footing wasn’t large, but its placement made an already spooky jump just a little spookier.

But Ava Stearns, 18, never wavered in her presentation. She sat down and got it done. And that made the APSCA Maclay National Championship judges Jimmy Torano and Tammy Provost sit up a little straighter.

Stearns, Chilmark, Massachusetts, was on top following the first round, but dropped to third after the flat. And while the minor bobbles that occurred in the second round may have had some viewers wondering how she moved back on top, for the judges, the choice was clear.

“In the second round, there was some light that came in that probably nobody noticed,” said Torano. “But when her horse went in the ring, it was trying to make a couple little mistakes, and Tammy and I really felt they weren’t riding errors. She dug in and got it done. The horse was for sure a little bit on guard, and obviously when she came back in for that final work-off she pulled out all the stops. She went in and she nailed it. For me the work-off was just a clear-cut winner.”

Stearns has been knocking on the door all season. She was second in the Platinum Performance USEF Show Jumping Talent Search—East (New Jersey), seventh at the Dover Saddlery/USEF Hunter Seat Medal Final (Pennsylvania) and second in the Washington International Horse Show Equitation Classic (District Of Columbia), so she was right on the verge of a big win. Everything just had to fall into place.

“I could not think of a better way to go out of my junior career,” said Stearns. “I’m so lucky to spend it with everyone from North Run. My whole final season could not have been possible without them. It’s so exciting to come back today after last week [at Washington] and feeling the strong finals finish.”

“Ava’s been such a hard worker for so long, and she’s really earned her moment here,” Clark said. “She’s worked with us for seven years and ridden everything and anything we’ve put underneath her. [Acer K] has never done the finals before; he’s only 8 years old. The whole thing is incredibly impressive. In my mind nobody deserves it more. She’s such a hard worker, so it’s so great to see her have this moment.”

Charlise Casas, 18, Kenilworth, Illinois, has only been showing in the equitation since March of this year after doing solely the junior jumpers. Despite her newness to the division, she finessed her way to a second-placed finish on Conthacco, a horse she’d only shown once before.

“Over the summer I struggled with the transition from the jumper ring to the equitation ring, but with repetition I found myself relaxing into the situation,” she said.

Elli Yeager made a giant leap up the leaderboard. Sitting 14th after the first round, she steadily moved herself up the ranking list, and following the test, the judges had her third.

“I didn’t have my first best round, but I could come back if I really worked at it,” she said. “During the flat I was flatting my butt off, because I knew I wasn’t going to let myself move down, and I actually moved up. I wanted to not finish on a silly mistake, so I just went for it because I knew I could do it with my horse.”

Don’t miss all the Chronicle’s online coverage, with behind-the-scenes stories, lovely photos and more! Follow the Chronicle on Facebook, Twitter and Instagram @Chronofhorse and check out the Nov. 18 issue of the magazine full analysis of the competition.