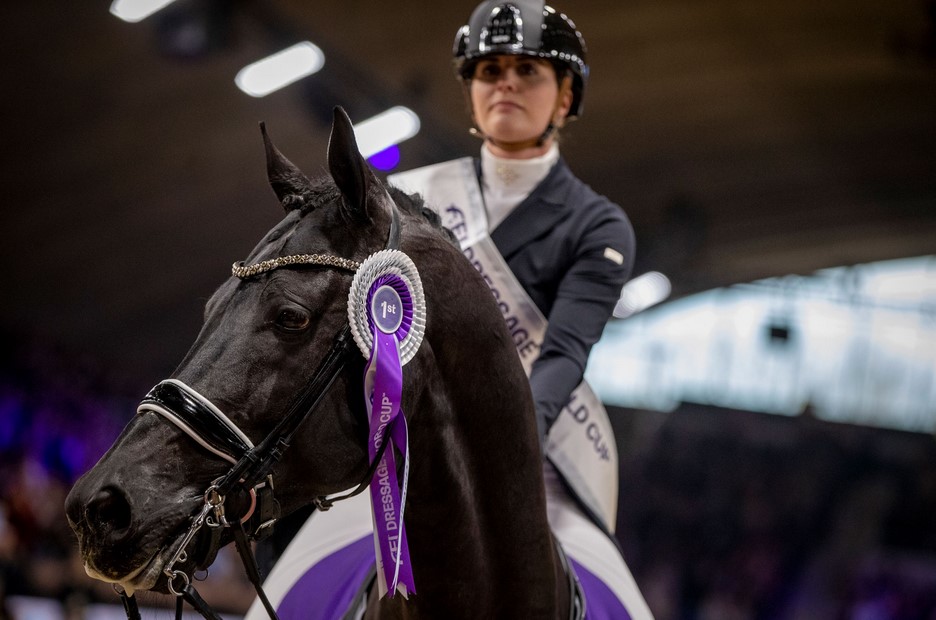 Emmelie Scholtens of the Netherlands won first place in FEI Dressage World Cup™ competition on Sunday at Mechelen, scoring a personal best of 85.075 percent in the Grand Prix Freestyle aboard Desperado N.O.P. Second place in the Belgian holiday show went to Maria Caetano of Portugal, who received collected marks of 80.940 percent with her Lusitano stallion Coroado.

Juan Matute Guimon, the 22 year-old from Spain, joined Scholtens and Caetano on the podium, taking third place along with Quantico, after posting an early score of 80.501 percent that held the lead until the final five riders.

The Christmas Arena was filled to the rafters on Sunday…

Dressage fans turned out to see one of the high points of Jumping Mechelen, a December tradition that includes Jumping, Driving, and pony shows, as well as Small Tour and Large Tour Dressage.

Horse and rider duos were looking for medals at the event, which awarded qualifying points to advance to the FEI Dressage World Cup™ Finals in Las Vegas next April. And with the Tokyo Olympic Games looming with 2020 right around the corner, athletes were also starting to think about securing coveted slots on their national teams.

Emmelie Scholtens was having a fabulous weekend at Leg 7 of 11 for the Western European League, having taken the top honours in the Grand Prix just the day before. Chasing her lead was Charlotte Fry of Great Britain and Maria Caetano, with João Miguel Torrao of Portugal and Morgan Barbançon Mestre of France close behind.

In the first group of riders on Sunday, Juan Matute Guimon, who has been on the rise this season, put in a gorgeous programme aboard the 13-year-old Hanoverian Quantico, winning an impressive 80.510 percent from the five international judges.

Guimon’s score became the one to beat after the interim, where Father Christmas took a carriage ride around the arena. Home rider Jeroen Devroe, a four-time World Cup finalist, had a nice ride with Hyrano, but at 75.705 percent, it wasn’t quite enough. Anne Sophie Serre of France and Actuelle de Massa fared a bit better with the judges, scoring 78.370 percent and making Serre a strong possibility for the French Olympic team.

It wasn’t until Maria Caetano and Coroado entered the arena that Guimon’s lead was broken. Caetano, who competed in her first FEI Dressage World Cup™ Finals in Gothenburg last year, had a dramatic programme that went beyond Coroado’s exquisite piaffe and passage to highlight his beautiful canter work, for a score of 80.940 percent.

Up next, Charlotte Fry, who placed third at Olympia last week after a spectacular performance, had a lovely performance with Dark Legend. The pair’s 79.075 percent put them temporarily in third place and showed the audience they are a force to be reckoned with.

Emmelie Scholtens and Desperado were next, riding third to last. An immaculate piaffe wowed the judges, and with 10s on their extended walk, the duo were awarded 85.075 percent, a personal best for Scholtens and a wide margin for the final two riders to beat. Riding Sir Donnerhall II Old, Morgan Barbançon Mestre, who has made it to multiple World Cup Finals, gave her usual consistent, elegant performance. While their score of 79.780 percent wasn’t enough to overtake Scholtens, it was a season’s best for the 27-year-old rider and enough to make her another contender for Tokyo.

Last to go, João Miguel Torrao and Equador showed off expressive tempi with great reach, as well as a one-handed canter and piaffe. Like the pair before them, the 78.870 percent they earned from the judges wasn’t sufficient to beat the Dutch duo, but it was a huge improvement over their 73 percent at Olympia. This combo can go home happy knowing there’s lots more to come in the future.

Said Scholtens of her victory:

“It’s a wild feeling! I didn’t look at any other competitors, so I thought I’ll just go for it. Yesterday was good, but I felt I could do a little bit better in the canter, so I tried that today. It’s important just to ride your own ride and not focus on the others. That’s what we did, and it worked out!”

Scholtens was looking forward to a celebration with her family and the owners of her black Dutch Warmblood stallion from Ad Valk Dressage Horses in the Netherlands, then some welcome sleep. Behind Scholtens, Caetano, and Guimon on the podium, Morgan Barbançon Mestre finished in fourth place, with Fry and Torrao picking up fifth and sixth, respectively. Rounding out the top 10 were Serre, Thamar Zweistra of the Netherlands, Devroe, and Frederic Wandres of Germany, a previous World Cup leg winner who just didn’t have the best weekend at Mechelen.

Morgan on the Rise…

Once again the overall rankings for the Western European League were shaken up. Germans Benjamin Werndl, Frederic Wandres, and Helen Langehanenberg hold the top three positions, separated by just three points. Hans Peter Minderhoud of the Netherlands is fourth, with Morgan Barbançon Mestre having moved up to fifth place. Charlotte Fry is now in the top 10, and both Emmelie Scholtens and Juan Matute Guimon are tied in 13th place on 33 qualifying points apiece.