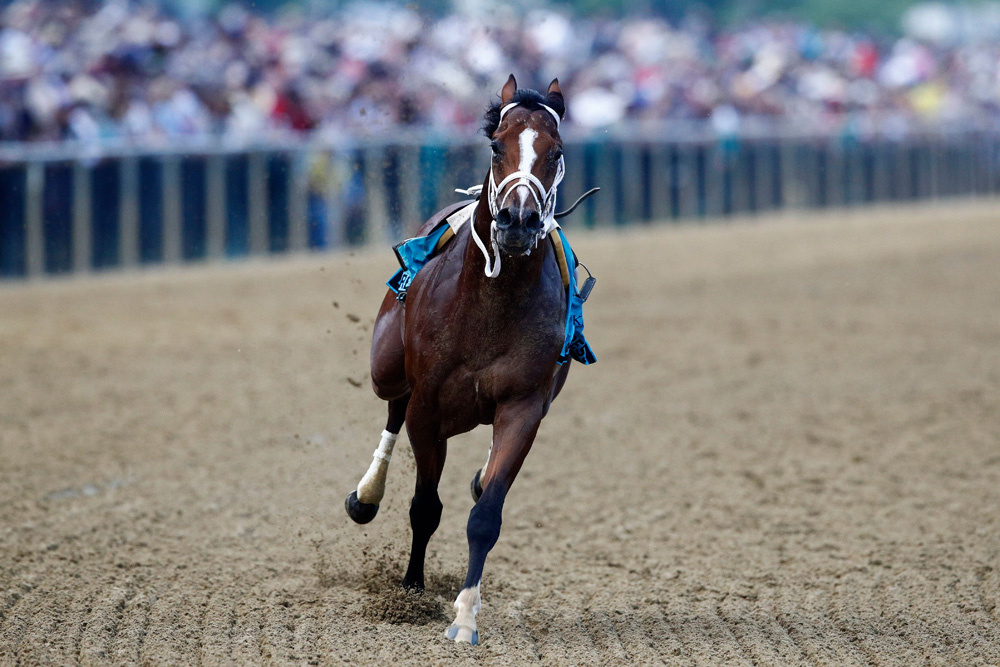 Anything can happen at the Preakness Stakes, including a riderless horse running the race. Bodexpress’ jockey fell off at the starting gate and the pony finished the race without him.

After the crazy and unprecedented end to the 2019 Kentucky Derby, everyone hoped that the Preakness Stakes, taking place on May 18, would run without any kind of crazy incident happening. Well, that obviously wasn’t the case. As the action was unfolding at the Pimlico Race Course in Baltimore, Maryland, War of Will won the race. But it was Bodexpress that got all of the attention because the colt’s jockey fell off right at the starting gate and the pony went on to complete the entire race without a rider!

Hall of Game jockey John Velazquez said after the race that it was his fault that he fell off of Bodexpress, and fortunately he was not hurt. Fans actually cheered on the pony as it kept up with the field during the race despite not having a rider to guide him. For a period, he remained in the middle of the pack before falling back towards the finish line. The jockeyless horse won the hearts of viewers, as one person tweeted “Is it wrong that I was pulling for a riderless horse to win?”

It appears that the wild finish of the 2019 Kentucky Derby signaled that this year’s Triple Crown was going to be one for the history books, for better or for worse. The “Run For The Roses,” which took place on May 4, appeared to go off without a hitch, as Luis Saez, riding Maximum Security, crossed the finish line first. Yet, he was not declared the winner. Flavien Prat, the jockey on Country House – who finished second behind Maximum Security – filed a complaint against the apparent winner, accusing Luis and Maximum Security of veering out of his lane and into the path of War Of Will, which caused Long Range Toddy to take back, and somehow prevent Country House from having a clear path to the finish. Keep in mind that neither of the jockeys who rode the affected horses filed the complaint and Deadspin called Flavien’s claim a “Hail Mary objection.” Well, sometimes Hail Marys work, as it did this time. Even though Maximum Security led the pack the entire way and was the visible winner, after 20 minutes of deliberation, the officials disqualified the horse and handed County House the victory.

Of course, that wouldn’t be the end of it. The owners of Maximum Security are suing in federal court to have their horses win (and the $1.86 million purse that comes with victory) restored, according to the Courier-Journal. Gary and May West, owners of the horse, filed their lawsuit in the U.S. District Court in Frankfort on May 14, after their appeal to the Kentucky Horse Race Commission was denied a week prior. The commission stated that its stewards’ findings on the in-race matters “shall be final and not subject to appeal,” but the Wests argue that the stewards never posted an inquiry, “having not observed any foul or interference.”

If filing a lawsuit wasn’t enough, Gary West challenged Country House, War of Will, Long Range Toddy, and Bodexpress in a 20 million dollar Kentucky Derby rematch. Gary, according to the Courier-Journal, said he would pay up to “$5 million to any of those horses — up to $20 million for all four — if they finished ahead of Maximum Security in a race before Jan. 1, 2020. They don’t even have to win the race to collect.” However, if any of the horses’ owners take him up on his challenge, they would have to wager $5 million of their own money to pay if Maximum Security wins.

“Most experts agree that Maximum Security was the best horse in the Kentucky Derby,” West said in a statement. “I don’t care to discuss the controversy surrounding the events of the race and the disqualification of my horse at this time, but I firmly believe I have the best 3-year-old in the country, and I’m willing to put my money where my mouth is.”