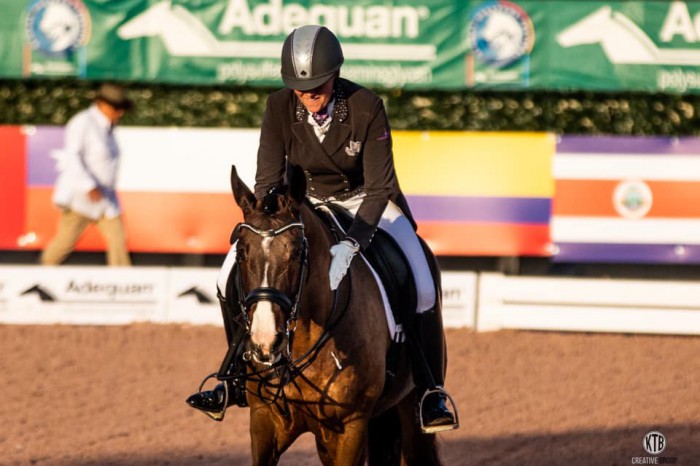 We’re halfway through our Florida season, and while I certainly don’t have NOTHING to show for it, I also feel like this season is creeeeeeeping by. I’m sure part of that feeling is that we came two weeks earlier than we normally do and are staying two weeks later, so there’s a whole ‘nother month to fill down here.

But I also think that, as my first horse show was such a hot mess, it really just took the wind out of my sails. Fortunately, I redeemed myself at my second outing; I still haven’t had THE SHOW I want to have, but at least I’m making some progress, and I’m learning something (if not some things!) every outing.

For this show, I over-prepared. After Elvis was uncharacteristically wild at Show 1 (truly, he’s a horse who’s never been naughty for longer than five seconds in our entire relationship, and he was OUT OF HIS MIND), I spent a ton of money and time and stress ruling out physical causes. He’s sound as a pound, his tummy looks good, and all my equipment fits beautifully. So then I rode him, and I worked him, and I went for it. Lastly, I arrived at the show a day earlier, to make sure I had plenty of time to school him in the show arena in case he had impure thoughts.

Naturally, Elvis was totally chill, and so by the time I got to my first class he was running out of gas, and by the second class, he was on fumes. Doh. But with a lack of power, no expression and a couple of hiccups (really, does anyone need the walk pirouette left? Psh.), he was still in the ribbons in big, competitive classes. I’m nowhere near producing the kind of tests I know my wonderful horse can produce, but after the fiasco of Show 1, I’ll cheerfully take it.

And as always, if I’m not winning, I’m learning. So here’s what I learned:

I also have a theory I’m going to test out: I’m wondering if he sleeps at shows. If you don’t know anything about CDIs, one of the big things is this: The jog (mandatory veterinary inspection) is on Wednesday morning, and from that point on, your horse is required to stay at the show. Even if your classes aren’t until Saturday and Sunday, you’re still stuck on grounds. And I wonder how long they turn the lights off in the stabling overnight, if at all. I’ve never had Elvis at a show longer than two or three nights, so four is a lot, especially if he’s not getting sufficient rest. I’m going to track down a darkening fly mask and give it a whirl at the next show. It may make no difference whatsoever, but I’m going to give it a spin.

The pesky thing about experience, Jimmy Wofford says, is that you get it 30 seconds after you needed it. And this is where things like the small tour are really great, because I’m cautiously optimistic that no one is really going to care how I did at this show when Elvis is a top-shelf Grand Prix horse. This is the time and the place to work out the kinks in my system for getting the best out of my horse, away from home, for a long period of time, at a big venue. The things I learned showing him at small venues, for shorter periods of time, are very valuable, but they’re just the beginning of this journey. I’m on to the next step now. And I loathe learning $900 lessons, but that’s how it’s going to be! (The next show? $1,218. For three classes. Ack.)

Puck is about to take his baby steps onto the path to big things. He’s finally capable of putting together a third level test like a responsible adult, with bend and expression and collection and the whole shebang. So off to a show we go, in a few weeks. Time to see if we can do it off the property!

To prepare for this, I’m taking him on lots of outings. I’ve been to Ali Brock’s a few times for lessons, and this week I’m going to be begging a few friends to let me come ride him around at their places. I’m experimenting with a sound-muffling ear bonnet too; I don’t think it’s making a difference at home, where he’s really been terrific, but maybe it’ll help him keep me as his highest priority off property? I’ve always felt that Puck’s demons are exclusively between his ears, not externally motivated, but if I can help him learn to stay focused on me, then that’s what I’ll do.