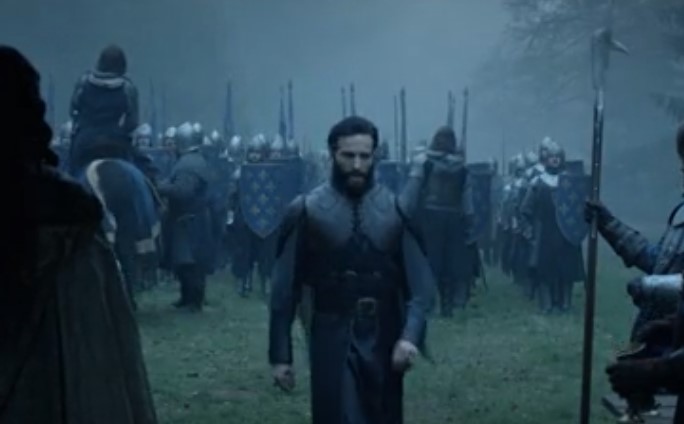 King Philip (Ed Stoppard) gets an update about Gawain (Pádraic Delaney) in this EXCLUSIVE preview of the April 15 episode of Knightfall. “How long does the cripple require to train my men?” he asks William (Julian Ovenden). William says it’ll be weeks before the men are ready. It doesn’t take long for Gawain to show off his power in front of King Philip, Princess Isabella (Genevieve Gaunt), and William. “Who is he, father?” Isabella asks with serious intrigue.

“The key to my victory,” King Philip tells his daughter. They all turn around to get a good look a Gawain. “Alone, you will not stand a chance against the Templars. But together in the name of our king, we will destroy them!” Gawain says to King Philip’s men. The soldiers immediately start cheering and King Philip looks very pleased. This is just the beginning of a long and brutal fight ahead between France and the Knights Templar.

The synopsis for the April 15 episode of Knightfall reads: “A mysterious knight arrives at Chartres Temple and brings the Knights Templar devastating news. Louis struggles to produce an heir, creating a rift between him and his wife. King Philip sends Gawain on a mission where he comes face to face with his former Templar brothers.” New episodes of Knightfall season 2 air Mondays at 10 p.m. on HISTORY. The series also stars Mark Hamill as Talus, Tom Cullen as Landry, Simon Merrells as Tancrede, Jim Carter as Pope Boniface VIII, Tom Forbes as Prince Louis, and Clementine Nicholson as Margaret.