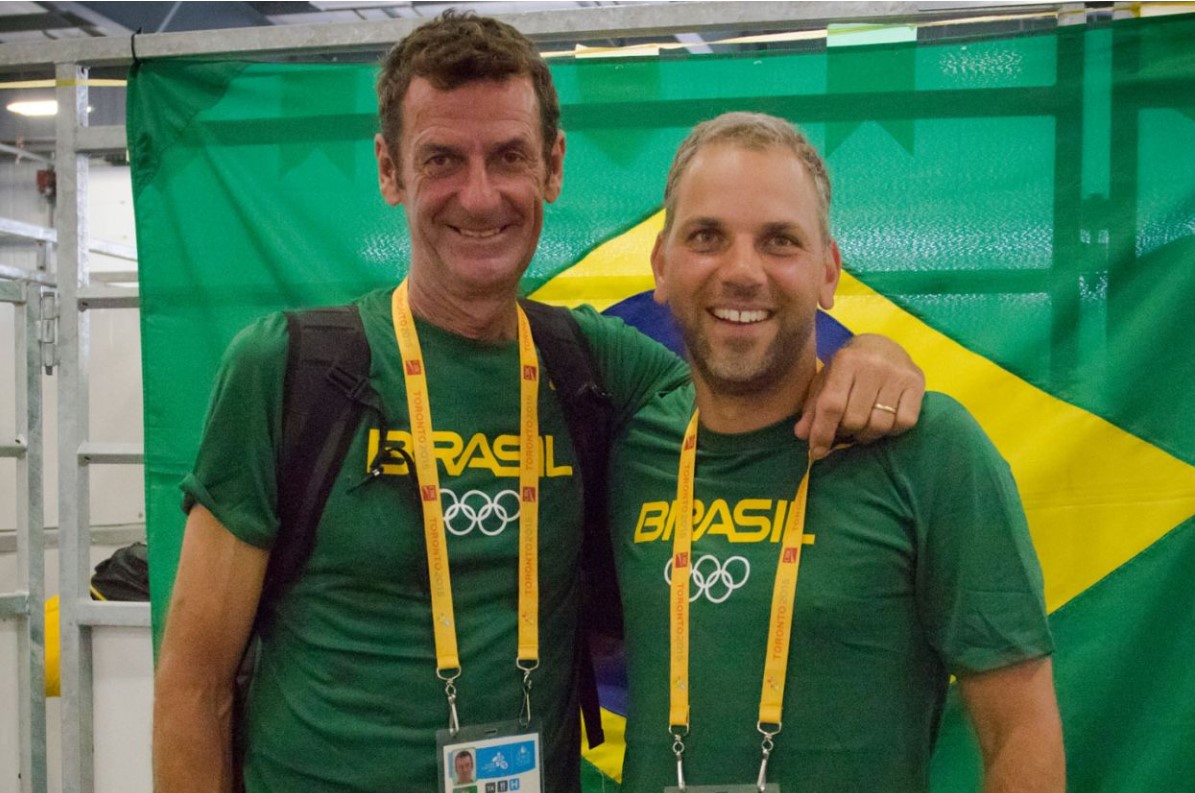 It’s now just six months until the start of the 2020 Olympic Games, when the world’s greatest sportsmen and women will come together in Tokyo. To mark the countdown to the Opening Ceremony on July 24, FEI.org begins a new series in which we speak to the Olympic champions of yesteryear. We’ll go back through the decades to catch up with those in Dressage, Eventing and Jumping who have stood on top of the podium to receive the ultimate accolade in sport – the Olympic gold medal.

We start our series with perhaps equestrian’s most successful Olympic athlete of all, New Zealand’s Sir Mark Todd, who won five medals — including two golds — in four different decades in eight Games between 1984-2012…

While Mark went on to enjoy an incredible Olympic career, it didn’t begin particularly well…

Mark was already a rising star on the equestrian scene by his early 20s and won at Badminton for the first time in 1980 with Southern Comfort. However, his hopes of making his Olympic bow that year were dashed by a widespread boycott of the 1980 Games in Moscow, with many Western countries, including New Zealand, refusing to send competitors following the Soviet Union’s invasion of Afghanistan. Mark was thousands of miles away at an alternative Olympics in Fontainbleau as the hosts took Team Eventing gold and Italy’s Federico Roman secured the Individual prize.

“It was disappointing, obviously, as I’d been targeting the Olympics due to my successes in the years leading up to Moscow. They held an alternative Olympic Games at the same time, but that didn’t go so well for me. I’d say the Olympics only really became a target once I was already getting towards the top of the sport. My Olympic hero as a kid was Peter Snell, the New Zealand middle distance runner, and my mum says that I once said “I’m going to go to the Olympics one day” but I don’t remember that!”

Following the Badminton success and Moscow disappointment, Todd’s career took a bit of a back step after 1980 and he returned from his base in England to New Zealand. However, that turned out to be perhaps the most important decision of his equestrian life as it was there that he teamed up with Charisma for the first time in 1983. Within the next five years the pair would become double gold medallists.

“It came around completely by chance,” Mark says. “But soon we were in a really good place and we travelled over to the UK and won Badminton again in 1984. By the time of the Olympics I was confident, although I’ve never travelled to an event thinking I’m going to win as so much can happen.”

After the frustration of 1980, Los Angeles 1984 was everything Mark had dreamt of.

“I was like a kid in the candy store in the Athletes’ Village. You’d see superstars such as Carl Lewis and all these fantastic sports people. Your first Olympic Games is always going to be pretty amazing, but LA did it all so well. It was a superb venue and fantastic facilities and I just had a really good feeling about being there. I knew Charisma was in good form, and that we were well prepared and everything clicked for us. Charisma was in such fine form that it was actually one of the few time he went clear in jumping.”

In front of the 16,000-capacity arena at the Santa Anita Racetrack, Todd and Charisma beat Karen Stives and Ginny Holgate (Leng) to take gold.

“It was an incredible feeling,” he says. “What makes the Olympics so different is that it’s something everyone in the world knows the value of.

To win at Badminton might not mean much to the man in the street, but they know that an Olympic gold medal means you are at the top of your sport.

“Did it change my life? It did and it didn’t. We kept very busy competing and did very well after that, so there was certainly no resting up to enjoy the win.”

Looking ahead to Seoul…

Todd was just 28 years old when he stood on top of the podium for the New Zealand national anthem in Los Angeles.

But while he would only be in his early 30s by the time of the next Games in 1988, he fully expected to have a different partner in Seoul, South Korea.

“Charisma was 12 in LA and so would be 16 by Seoul,” Mark says. “At that time, because of the long format, not many horses were still competing at top level at 16.

So after we won in LA we assumed he’d be too old for Seoul and spent time looking at other horses. But as those four years in between went by he kept improving, so we stayed together and began to plan for 1988.”

Mark had a few concerns about his preparations in the months leading up to the Olympics. He was dividing his time between Eventing and Jumping, which meant his focus was split more than it had been four years previously.

He also had history against him as no one had defended an Olympic Eventing title since Dutchman Charles Pahud de Mortanges in 1932.

However, a victory in the British championships at Gatcombe meant Mark and Charisma headed to Seoul full of confidence.

“In Seoul Charisma was as good as ever. He was such a tough and superb athlete that at 16 it was like he was 10.

He produced his best ever test in Dressage – in fact a reporter said it was technically better than the individual winner’s performance.

In cross country he had his fastest time and so we went into the jumping round with two rails in hand. As was his norm, he felt his way round, but we won.”

Mark stood on the podium with good friends Ian Stark, who took silver, and Ginny Leng, again in bronze. New Zealand’s Eventing team, which also included Margaret Knighton, Andrew Bennie and Tinks Pottinger, would also pick up a bronze behind West Germany and Great Britain. But it was the end of the line for Mark’s partnership with Charisma. “It was always the plan to retire him after 1988,” says Mark. “It was incredible that he was able to retire on a winning note.”

In 1992, the year Todd was the New Zealand team flag-bearer, his horse, Welton Greylag, broke down during the competition. He also rode Double Take to 37th in the Jumping that year in Barcelona. In Atlanta four years later Kayem was ruled out on medical grounds. He added to his individual Olympic medal collection with bronze in Sydney on Eyespy II in 2000. At 44 years old, he decided that it was time to bow out.

“Sydney was a really great Games – they did a really great job. We were in the process of moving back to New Zealand, and it was good to have an Olympics closer to home and family.

We performed pretty well, although the cross country was my longest ride ever. I got held on the course twice — my total time was around half an hour!

I felt Sydney was the time to stop. I just felt I’d been doing it a long time and if do anything else I’d have to do it sooner rather than later.”

While his competitive days seemed to be over, he had a less than enjoyable experience as a coach with the New Zealand team in Athens in 2004. No longer an athlete, he found that long, long days at the venue supporting the whole team were not to his liking!

Of course, that wasn’t quite the end of the road for Mark and his Olympic career. In 2007 he welcomed New Zealand team chiefs Erik Duvander and Andy Pottinger as guests at his house. After perhaps one too many glasses of wine, the possibility of Mark making a sensational return to the NZ team for the following year’s Games in Beijing cropped up almost in passing. Matters got a little more serious a few months later when Mark received a phone call, which began with, “I believe you’re looking for a new horse!” Soon Mark had linked up with the grey Gandalf and he was back on the Olympic trail.

“It almost became like a challenge for me. Could I actually qualify for the Olympics again? I

have to say that it would have only taken one setback for it to have come to a stop.

Things just seemed to click and fall into line and the path cleared to take my place in Hong Kong.”

After eight years of retirement, all of a sudden Mark was again leading New Zealand’s Eventing team at the Olympic Games!

While there were no medals to add to the collection, he continued to compete and again qualified to participate at London 2012. From the fresh-faced 28-year-old at Los Angeles, at 56 years old he was now his country’s second oldest ever Olympian. But he was still competitive, and won his fifth and final Olympic medal by grabbing a Team bronze with Campino.

“2012 was special. Everyone wondered whether Greenwich Park was right, but the London Olympics were amazing full stop and it was a brilliant venue.

“I ended up riding my third choice. Campino was inexperienced but he went really well. We were actually in the top three after cross country, but the exertions took their toll on him. I could see he was tired ahead of the jumping and we hit a couple of rails, but we did enough to hold on a bronze.

Of course, it was again fabulous to be on the podium after 12 years. It was a record, I believe, for the longest period between medals – 28 years!”

Mark just missed out on a sixth medal in 2016 with Leonidas II as New Zealand came fourth in the Team event in Rio de Janeiro. Todd retired from equestrian sport in 2019 – seemingly on a permanent basis this time – and now trains racehorses in Wiltshire. While he won numerous honours, including two gold medals at the FEI World Equestrian Games and multiple wins at Badminton and Burghley, it is perhaps his mesmerising displays at the Olympics that led to him being named the FEI’s Rider of the Century at the end of the 1900s.

“I had such a wonderful career,” he says. “Now it’s time for something different.”