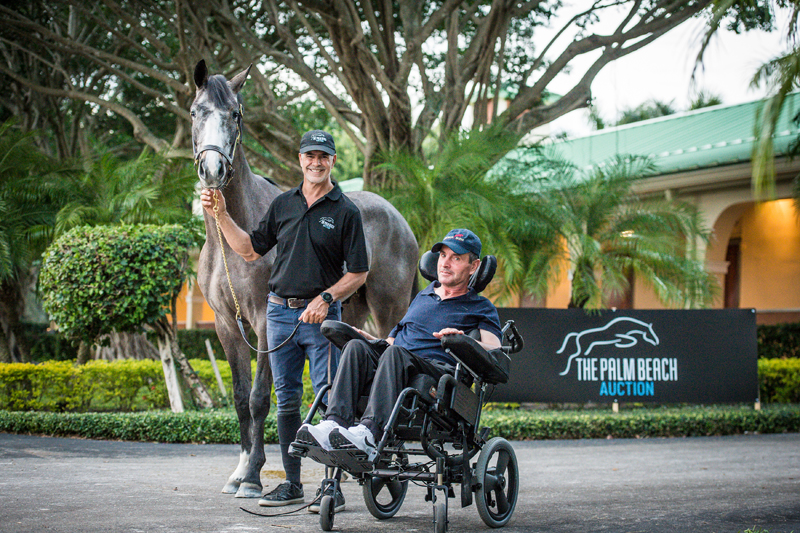 Give Support, Get Support: The Palm Beach Auction Steps Up For Kevin Babington

Aug. 30, 2019, started as just another horse show day for Juan Pablo Gnecco. It was the Friday of the Hampton Classic Horse Show in Bridgehampton, New York, and he was entered in the afternoon’s grand prix qualifier. He stopped to chat with a fellow rider about the track, and they discussed various plans for how to ride it. The course looked tough, and after Gnecco walked it, he decided to scratch from the order.

Later in the afternoon in that same class, Kevin Babington suffered the catastrophic fall that resulted in a spinal cord injury and paralysis from the neck down. Like most everyone at the show and in the greater horse world, the news set Gnecco, an amateur based in Florida, back on his heels, and not just because it had been Babington with whom he’d chatted before the class.

“Kevin has always been the type of person who you could approach anytime at the show,” Gnecco said. “When the accident happened, I said I have to go visit him, and when I went, I was reminded of the person he is. You ask him, ‘Hey Kevin, how are you doing?’ and he says, ‘I’m good; I can’t complain.’ And that is how he was before the accident.”

Gnecco had been working on a concept to hold a young horse auction in Wellington, Florida, for the year prior. He got into the sport by buying horses and bringing them up the levels before selling them. He planned for his event, The Palm Beach Auction, to source young horses with potential for the top level and present them in a live auction format.

The idea gained the support of the Jacobs family, and the auction found a venue at their Deeridge Farm. It will take place on Feb. 13 during the Longines FEI CSIO5* Nations Cup week.

But before the auction could happen, Gnecco needed to select the horses, and it wasn’t a job he wanted to do alone. Olympic show jumpers Laura Kraut and Nick Skelton agreed to be selectors for The Palm Beach Auction, and when Gnecco went to visit Babington in the hospital, he asked if Babington would be the third selector. Babington agreed.

“When I went to see Kevin, he was always completely enthusiastic. He wanted to see videos of the horses, and it was amazing to get his feedback,” Gnecco said. “He would look at each video I sent him and would give me detailed feedback on each horse by telling it to his daughter, Gwyneth, who would then handwrite what he said and send it over to me.”

Babington reviewed more than 100 videos, helping to eventually narrow their selection down to a final group of 16 horses.

“It was my pleasure. I enjoyed it,” Babington said. “Here, people are starting to realize that if they want a good return they have to have good quality in a young horse, and that’s the most important thing to realize.”

On a recent afternoon, Babington visited the barn where the auction horses he helped select are stabled ahead of the event. Gnecco and Babington went from stall to stall, talking about each horse and the qualities that had stood out to Babington in his selection process. As Gnecco walked next to Babington through the barn, it was clear that what started as a casual association between the two horsemen before the accident has become a meaningful friendship.

But then Gnecco went a step further and introduced Babington to a 17th horse. A dark gray 3-year-old gelding by Balou Du Rouet, Balou Son will be auctioned off on Feb. 13th with 100% of the proceeds going directly to Kevin.

During his work with Babington, Gnecco saw the financially challenging situation  he and his wife, Dianna Babington, are facing as they try to plan for the future. Even with incredible support from the equestrian world after the accident, their expenses for things like modifying their home to accommodate a wheelchair, funding rehabilitative equipment and a full-time, trained aide are astronomical. After the accident, clients left, and the Babingtons are facing the challenge of reshaping their business and finding ways to continue the riding careers of their two daughters.

“A lot of our business was Kevin as a rider,” said Dianna. “Now we’re trying to figure out what the new face of the business will be. There have been a lot of people who, I think, understood this before I did. I was in such shock in trying to just keep swimming, and they had a real understanding of what we were up against before I did. And thank God.”

Balou Son has an exceptional trot and scope and was raised in Belgium by Karel Aerens. Darragh Kenny owns Balou Son in partnership with Gnecco, and they donated him to the auction.

“He is a super sweet horse,” Gnecco said as he stood in the open door of Balou Son’s stall. Babington looked on as the gelding lipped at Gnecco’s hat.

“As a 3-year-old, you could get more people bidding on him as a hunter,” Babington observed. Looking at the young horse, you can see that future potential: He is typey and beautiful.