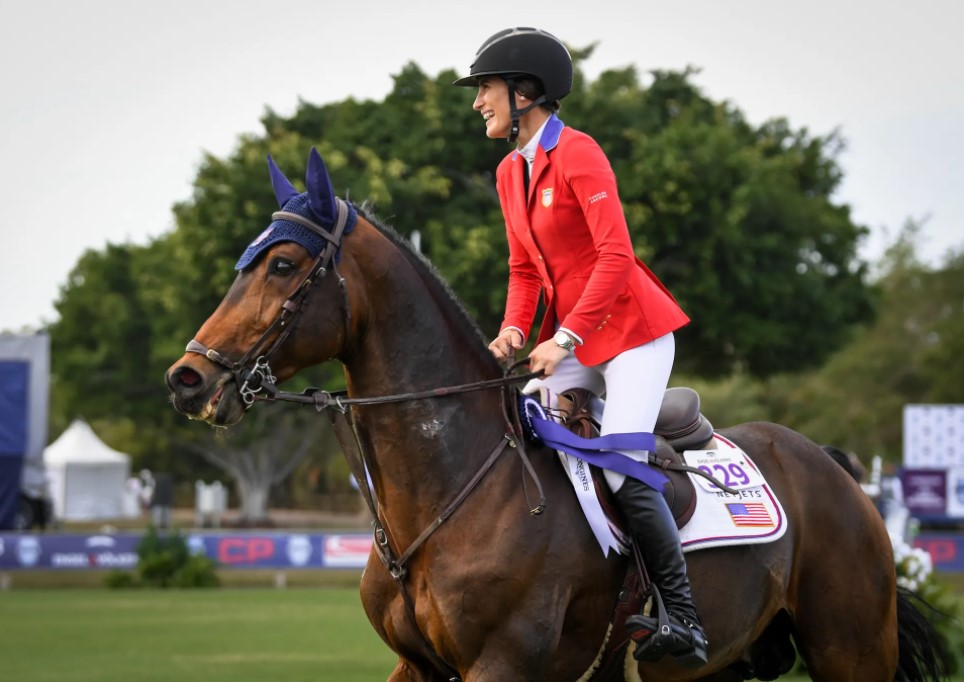 Competing at the 2020 Olympic Games in Tokyo next week will be a first for equestrian Jessica Springsteen. The American athlete is currently ranked 14th on the international riding list, and she is set to compete in both the individual and team jumping categories (with her horse Don Juan van de Donkhoeve). “This has been my dream since I first started riding, so it all still feels surreal,” Springsteen tells Vogue. The 29-year-old will be the youngest of the four Team USA riders at the games, alongside McLain Ward, Laura Kraut, and Kent Farrington. “My teammates are riders I’ve looked up to throughout my career, as well as former Olympians, so I’m really looking forward to sharing this experience with them,” she says. “It’s always an honor to represent my country, and to be doing so at the games is something in which I take great pride.”

While it will be Springsteen’s first time competing at the Olympics, she is no newbie. Springsteen—who is the daughter of musicians Bruce Springsteen and Patti Scialfa—grew up riding at her family’s New Jersey farm, and she has also competed for the U.S. jumping team in many Nations Cup team competitions. (She has also been a part of the winning U.S. Jumping Team at the FEI Jumping Nations Cup Dublin in 2014 and the FEI Jumping Nations Cup USA in 2020.) Next week, however, she and Don Juan van de Donkhoeve will be judged on a more global scale, as they race at 15 miles per hour on a course that includes 12 to 14 obstacles (which can be more than five-feet tall!).

Prepping for such a Herculean event has been no simple feat for the athlete. In addition to many rigorous workouts—Springsteen focuses on strengthening her legs and core, which are integral to riding—the athlete says the lead-up to the Olympics has been all about consistency and practice. “The best way to keep yourself sharp and to stay in shape for show jumping is to constantly ride,” Springsteen says. “Normally, when we go to a competition, we bring multiple horses, so that we are able to stay in a good routine. At the Games, we only bring one horse, so I tried to ride as much as I could before I left in order to keep myself feeling strong when I got to Tokyo.”

As a result, even her horse required extensive training ahead of the competition. “Don is a really talented horse, and we have formed a solid partnership over the past two years,” says Springsteen. “If there’s a weak point I might think we have, we will practice it at home, but mainly I’m just exercising him to get him in peak condition. He has a lot of energy, so I work towards getting him as relaxed as possible, so he’s focused and we’re in sync when we compete.”

Compared to other sports that have a more standardized uniform—like, say, the white suits tae kwon do competitors wear—riding uniforms can strike more of a balance between performance and style. Springsteen’s riding ensemble next week will reflect this (which brands she will wear is still under wraps). “We wear white breeches, collared shirts, tall boots, and our USA show coat,” Springsteen says of her look. “It’s a very classic uniform—but, of course, the fabrics have been updated over the years to make them more athletic.”

Even though it looks streamlined—and, dare I say, even chic and tailored—Springsteen says her look has technical elements that help her perform at her best. “The more technical and sweat-wicking fabrics are key,” Springsteen says. “You want to be able to move freely in your jacket and not feel constrained.” She hints that her favorite breeches are made by Cavalleria Toscana. “There are a lot of brands that do a great job of making the gear sporty and easy to move in, while also staying true to the traditional look,” she says.

When she’s not competing, however, you won’t find Springsteen rocking an equestrian-inspired look, complete with blazers and tall boots. “I wear breeches and coats so often that I never want to wear white jeans or blazers outside of the arena,” Springsteen says. After she competes next week, no matter the outcome, she’s looking forward to getting some well-deserved time away from riding in general—both in terms of fashion and training. “I am the most excited to go home and be with my friends and family,” says Springsteen. “I wish I could share this experience with them, but I feel their support from home.”