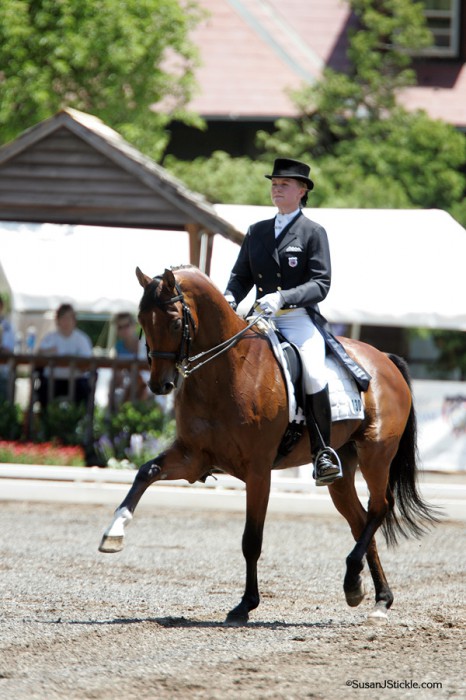 This week’s PEOPLE cover star got bit by the horse bug as a kid, and never looked back. The Mean Baby author, 49, announced in January 2021 that she was thrilled to hop back in the saddle after having to take a lengthy break due to her multiple sclerosis symptoms.  Saying that she was giving herself grace as she restarted her riding career, Blair opened up about how much her horse Nibbles (who joined her PEOPLE shoot!) meant to her. “When I am at the barn I finally have the white unicorn I cannot believe is in my life and I want to rise to the occasion,” she wrote in a heartfelt post. Carter Smith

Turns out, you never grow out of wanting a pony for your birthday. The Queen proudly posed with two of her white fell ponies in majestic portraits released for her 96th birthday on April 21. The monarch has always had a fondness for horses and was given her first (a Shetland pony) at age 4. She’s also been known to get animated at horse racing events, enthusiastically cheering for her horses, and passed down her passion to the next generation of women in her family (but more on that later).  Lichfield/Getty

When she’s not busy filming, The Flight Attendant star is an avid equestrian and competes in elite showjumping events with her Big Bay City team. Though the 35-year-old actress has split from her husband, Grand Prix jumper Karl Cook, she’s continued to celebrate his success in the show ring with shoutouts on social media. Clicking from the start over the common interest, the former couple met at a horse show in 2016 and married in a romantic stable wedding two years later. Kaley Cuoco/Instagram

One to watch in the horse world, Steve Jobs‘ daughter is a rising star in the sport. The 23-year-old Stanford grad has represented the U.S. at FEI Jumping Nations Cup events and voiced hopes of taking her talents to the Olympics in a 2020 interview with World of Showjumping. “I am a competitive person, so I definitely thrive on the competition aspect,” Eve explained of why she’s drawn to riding. “As most mistakes that happen in the ring are caused by rider errors, I believe that as a rider – if you are willing to work hard and keep pushing yourself to do better –  you can get far. And I like to push myself to do better.” LUKA GONZALES/AFP/Getty

This Springsteen rocks her own arena! Bruce Springsteen‘s daughter Jessica is a professional equestrian, and won a silver medal with Team USA for showjumping at the Tokyo Summer Olympics. Speaking with PEOPLE ahead of her Olympic debut, Jessica said was the “biggest honor” to ride for the U.S. in her discipline’s highest level. “Throughout my career, representing my country has been my goal, and so to be doing so at the Olympics, it’s a huge honor. I couldn’t be more excited,” the 30-year-old said. Julian Finney/Getty

When she’s off duty from designing, The Row co-founder loves to ride. Olsen, 35, placed in the top ribbons of her events at the Longines Global Champions Tour in Rome in September 2021. Years ago, former Full House star the opened up about her love for horses and riding in a profile for the HITS show circuit. Olsen cited riding as a beloved childhood outlet, one that was difficult to step away from after moving to New York City for college. Of her decision to return to the ring years later, she told HITS, “I came back to the sport because I missed it every day that I wasn’t riding. It was the hardest thing to leave and the hardest thing to come back to.” SHARKY/MEGA

Dwayne Johnson‘s daughter is taking the reins! The Jungle Cruise actor raved about his 6-year-old daughter Jasmine working hard to earn ribbons at a recent competition. “I love that she has a competitive fire (wonder who she gets that from 😂🤦🏽‍♂️) but she’s not obsessed with winning,” the former WWE wrestler wrote in a Instagram tribute, sharing an adorable shot of himself in horse show dad mode with his little equestrian. “The quality that I love is that she’s passionate about riding and passionate about animals.” The Rock/Instagram

When she’s not studying for medical school at Mount Sinai, the eldest daughter of Bill Gates and Melinda French Gates is a Grand Prix showjumper on the international circuit. Jennifer, 26, has represented the U.S. on Nations Cup teams in 2017 and 2018, and married fellow equestrian Nayel Nassar in October 2021. The newlyweds run Evergate Stables, where Nassar, 31, trains out of. Holding his own in showjumping’s highest echelons, he’s currently ranked No. 27 in the world by the International Federation for Equestrian Sports.  Mike Marsland/WireImage

Like mother, like daughter! The supermodel has shared snaps of herself saddling up through the years with her “little horse lover,” daughter Vivian, 9. Bündchen, 41, has even reined in husband Tom Brady and sons Benjamin, 12, and Jack, 14, (whom the quarterback shares with ex Bridget Moynahan) for equestrian adventures on family vacations. Gisele Bündchen/Instagram

Once a horse girl, always a horse girl. The author and animal rights advocate, 32, opened up in PEOPLE’s 2021 Beautiful Issue about the magical moment of introducing her horse Cinco, whom she’s owned since childhood, to her daughter Lyla Maria, 1½. “I’ve had Cinco in my life since I was in middle school, so to be around him now with my daughter made me so happy,” Schwarzenegger Pratt said. “Then to be able to have her pet Cinco’s nose and get so excited about it made my heart swell!” When Lyla gets older, the mom is hopeful her daughter will love spending time at the stables as much as she did. “It’s really important to me to have the barn be a part of her life as it was such a big and important part of my life,” Schwarzenegger Pratt told PEOPLE. “Growing up in Los Angeles, I think it’s important for people, especially kids, to have a place to get dirty, be free and be around animals in open spaces. It was a huge help for me growing up, and I know it will be for her too.” Brian Bowen Smith

Former New York City Mayor Mike Bloomberg‘s daughter is a professional showjumper who’s helped Team USA medal at the Pan American Games and also competes in some of the world’s most prestigious Grand Prix events. Out of the arena, the decorated equestrian, 39, is an animal welfare advocate and runs The Rider’s Closet, a nonprofit that provides donated riding apparel to young equestrians in need. Aaron Gilbert/Icon SportsWire/Getty

Though she’s famed for her iconic sense of style and work in the arts, most Americans don’t know that the former first lady was an accomplished equestrian. Kennedy’s lifelong love of horses was the subject of the 2004 text The Private Passion of Jackie Kennedy Onassis: Portrait of a Rider, which explored the therapeutic outlet riding was for her throughout her tumultuous life. Keystone/Getty

At attention! The only daughter of Queen Elizabeth and Prince Philip made history in 1976 as the first member of the British royal family to compete in the Olympics, riding in the three-day event for Great Britain. Like her mother, the royal has even ridden alongside the Household Cavalry Mounted Regiment for the Trooping of the Colour parade, most recently saddling up at the last large-scale event in 2019. Princess Anne, 71, is still involved with the Olympics today, serving as the president of the British Olympic Association and as a member of the International Olympic Committee. Max Mumby/Indigo/Getty

When you’re the child of two decorated equestrians, you’ve got a leg up! The daughter of Princess Anne and ex-husband Captain Mark Phillips (who also rode and medaled for Great Britain at the Olympics in 1972 and 1988) won a silver medal of her own in three-day eventing at the London Summer Games in 2012. Tindall, 41, still shows competitively, most recently riding in the Barefoot Retreats Burnham Market International Horse Trials in April 2022. There, she was supported by an adorable cheering section – her three kids Mia, 8, Lena, 3, and Lucas, 1, whom she shares with rugby player husband Mike Tindall (who was also in attendance). Indigo/Getty

Before she committed to the catwalk, the 27-year-old supermodel competed in horse shows and still enjoys spending time with the animals today. While expecting her daughter Khai (now 1½), Hadid said she was stepping away from the sport. “Early on I did (only walking tho) but not anymore. Missing it!!” she told a fan on Twitter in August 2020. “I still hang w em and bring them carrots,” she replied to another user who noted that the horses must “miss [her too].” Gigi Hadid/Instagram

Like her older sister, Bella was serious about riding before taking her modeling career to the next level. Nationally ranked as a teen, the 25-year-old supermodel once had her sights set on competing at the 2016 Summer Olympics, before shifting gears due to her serious symptoms of Lyme disease. Still finding solace at the stables today, Bella shared a snap of herself riding in a January 2021 Instagram post about returning to social media after a brief break. “I found myself, my strength and my light again,” she wrote of feeling recharged. Bella Hadid/Instagram