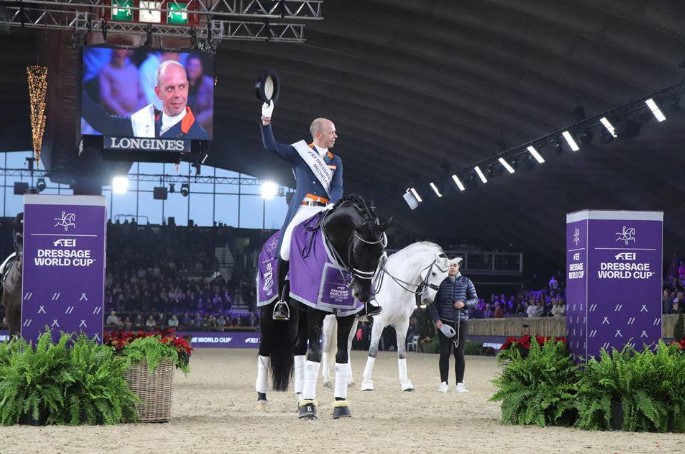 For the fist time in six years, the world’s biggest stars will be competing for the FEI Dressage World Cup at Flanders Christmas Horse Show – Jumping Mechelen. Belgian dressage is on the rise and therefore it deserves to be center of attention at Jumping Mechelen.

This year Jumping Mechelen also have a real scoop. Using the new ‘Spectator Judging’ app, fans will be able to score the World Cup competitors themselves, in real-time. On a big screen in the main arena, we will show the spectator scores and compare them to the verdict of the jury.

We know that Flanders’ Christmas Horse Show is definitely worthy of hosting an FEI World Cup. No effort was too big to celebrate the return of the World Cup dressage to Malines.

In a thrilling freestyle, we saw Hans Peter Minderhoud and Dream Boy clinch the victory with a score of 83,665%. Germany’s Helen Langehanenberg finished close behind on a score of 82, 880% to take second. And then…there was Maria Caetano with Lusitano Coroado, the revelation of Jumping Mechelen. After a spectacular test, the crowd went crazy. At the press conference we had the chance to ask some questions at this rising dressage star Maria Caetano.

EL: Congratulations Maria, how did you feel about the test? M: It was my first time competing at Jumping Mechelen and it is a big pleasure to be here. My horse was with me every step he took and was fighting to perform, both in the Grand Prix and the Freestyle test. When I entered the arena and he heard the music, he felt very happy and easy to ride. EL: Everybody had goosebumps while watching your test and the crowd was cheering for you and your horse, how does this felt? M: I was very grateful that to feel that the crowd was supporting me so much and I think my horse felt it as well! Coroado wanted to perform as he is a stallion. He likes to show his big neck and wanted to show the Belgium public that he came all the way from Portugal to show nice moves at this big level.

EL: Are you going home after the competition? M: No, I am based in Germany now at Hof Kässelmann and I am training here since October. I am moved to Germany in May to prepare my horse for the competition in Tryon and to compete at CHIO Aachen. But than I decided to stay a little longer. It is hard to be away from my family as I used to train with my father in Portugal. For now it is important to me to stay in the center of Europe, so I have more chances to compete at Grand Prix level. EL: Do you have more horses? M: Yes, I also have some younger horses and I also own the full brother or Coroado, who will be starting to compete at Grand Prix level.

President of the FEI Dressage Committee, Frank Kemperman lauded the organization of Jumping Mechelen for hosting the World Cup Dressage in such a great way. It was 6years ago that there was a World Cup dressage in Malines but now they are back on track. There are many candidates for organizing a World Cup. In the next months, everyone who wanted to host a World Cup needs to make a bid at the FEI. Before spring, we have to decide wether it will be organized at Malines or not.