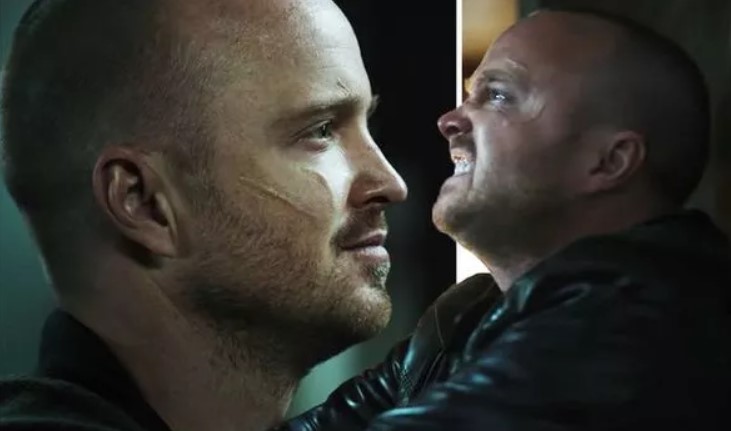 BREAKING BAD movie El Camino premieres on Netflix next month and now the streaming network has released the final and official full-length trailer, which sees Jesse Pinkman continuing his journey after the events of the TV show’s finale Felina. The clip’s cliffhanger may have been explained as fans attempt to work out who the mystery man is.

Momentum continues to build for the new Breaking Bad movie El Camino, and excitement reached fever pitch with the final trailer. It delves deeper into Jesse Pinkman’s (played by Aaron Paul) journey following the events of the AMC series’ finale, which saw Walter White (Bryan Cranston) die a bloody and poignant death. As Jesse sped away in his getaway car after the massacre with Uncle Jack’s gang, fans were hopeful the character would finally get his peace.

But the final scene in the new trailer may have revealed Walter didn’t actually die at all, and has come back to haunt his old work partner once more. In chilling tones, a mystery voice says: “You ready?” and Jesse simply nods his head in agreement. Is it Walter?

A clip released yesterday showed Jesse listening to a radio news broadcast about the killings he escaped in Breaking Bad’s series finale. And after some sleuthing, fans picked up that Jesse was sitting in the exact same car he escaped in. The broadcast warned police are on the hunt for a man seen fleeing the crime scene, suggesting this is none other than Jesse. What’s more, Jesse appeared to be in a situation very close to the one in Felina, suggesting the film returns to Jesse only days later, despite it being six years since Breaking Bad finished in real life.

The radio also mentions “nine male victims”, prompting some fans to speculate this is Uncle Jack’s gang and Walter. But what if Walter managed to escape his apparent death has been searching for Jesse ever since? If this is the case, will the troubled character ever manage to get out from under his former partner’s shadow?

The first El Camino trailer also saw Skinny Pete being interrogated by the DEA, and now the latest one sees Pete and his friend Badger coming more to the forefront. Jesse can be seen asking his old friends for help, but they seem helpless and struggling to comprehend his plight. Chased by the law and determined to move on with his life, Jesse is running out of options according to the new trailer, culminating in the final scene.

But if it isn’t Walter, who could the mystery man be?

Is it simply a police officer having finally caught up with the criminal?

Writer-director Vincent Gilligan recently said there will be no explanation for non-fans and the film will jump straight back in to the story. Speaking to The Hollywood Reporter, he said: “We don’t slow down to explain things to a non-Breaking Bad audience.

“I thought early on in the writing of the script, ‘Maybe there’s a way to have my cake and eat it too.

“Maybe there’s a way to explain things to the audience.’

“If there was a way to do that, it eluded me,” the writer added.