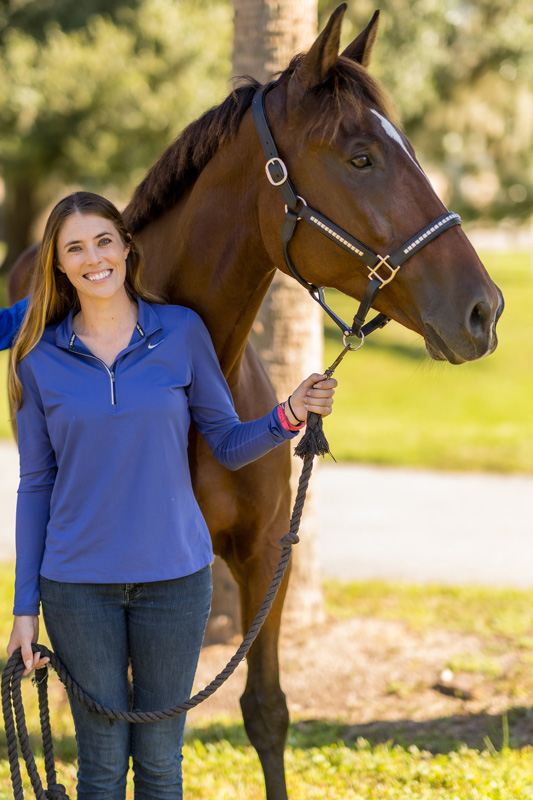 Back From The Brink: Danielle Ammeson Rolled The Dice On Casino Royale

One summer afternoon in August of 2016, Danielle Ammeson went to bring in her 7-year-old American Warmblood Casino Royale from his paddock at her mother’s home in Sarasota, Florida. As she approached, she saw “Royal” standing motionless on three legs, his right hind hoof elevated. He had a scrape near the hock and was missing a shoe. To this day, Ammeson isn’t quite sure what he did, but she assumed he’d recover with a few days of diligent care.

“We thought he needed some antibiotics, and he’ll be fine,” she remembered. “Initially it wasn’t oozing like it would later. At first it looked like he just took the skin off.”

Ammeson had owned Royal (Cathalido—Grande Amie) for about two years. A former hunt seat rider, she’d fallen in love with dressage. She took lessons on her mother’s Quarter Horse Zanzibar, before looking for a horse that could go further up the levels. Ammeson and Royal had competed at training and first level and had qualified for the GAIG/USDF Region 3 Championships (Georgia) for the first time.

“I was going to go with a few girlfriends. We had all qualified, and we were all going to go together,” she said. “It was going to be so exciting. We all use the same trainer, and I was really looking forward to it.”

Their veterinarian, Kaiser Clinton, DVM, treated Royal with several regional limb perfusions of antibiotics. But the injury didn’t heal, and by the end of the week Royal’s leg had begun to swell. That swelling hid a small puncture wound that had become infected. When Clinton didn’t see the improvement he’d expected, he suggested going to the University of Florida’s Alec P. and Louise H. Courtelis Equine Hospital, three hours away in Gainesville.

There, veterinarians discovered the infection had gone through the tendon and tendon sheath straight to the bone. Royal was scheduled for emergency surgery the following day. UF’s Alison Morton, DVM, DACVS, DACVSMR, and the service chief of large animal surgery, performed a tenoscopy, which is a minimally invasive procedure that allowed Morton to look at the infected structure, clean it out, and remove pieces of infected bone and tendon.

Royal landed in the intensive care unit as Morton tried a series of antibiotics to combat the infection. He didn’t respond to any of them.

“In our hospital, it is common to see these types of aggressive bacterial orthopedic infections, and they are often resistant to many of our ‘first-line’ antimicrobials,” said Morton. “We are a full-service referral hospital that sees these types of cases when they are identified or not responding to routine therapies in the field. Overall, most horses will not develop this type of infection following wounding, although the potential always exists, since horses live in environments where they are commonly exposed to bacteria that live in dirt and manure.”

Royal was still non-weight bearing on the injured leg, so supporting limb laminitis was a constant concern. Morton packed foam into a specially made boot to help reduce tension on the deep digital flexor tendon of Royal’s left hind, minimizing the load as much as she could.

Throughout his treatment, Morton said Royal remained chipper, sticking his head out over his webbing, watching people go by.

“I remember his big face greeting me every day,” said Morton. “He was like an oversized Labrador retriever that wanted to go play ball. He was always game for attention, and he was a bit mischievous, looking for treats in your pocket or wanting to play with the brush you were using to groom him. He took care of himself and trusted us to treat him throughout some very uncomfortable days and procedures.”

Morton was running out of antibiotics to try, but she wasn’t ready to quit. Royal’s attitude was a big part of the team’s motivation to keep going.

Finally, Morton contacted Rood and Riddle Veterinary Pharmacy in Lexington, Kentucky, and was able to secure a compounded antibiotic that was no longer commercially available. Royal’s condition stabilized. He didn’t improve much, but he was no longer going downhill. Four weeks after he entered the hospital, he was still non-weight bearing on the injured limb, and the muscle on that side of his hindquarter had completely atrophied. Once his medications could be given orally, the Ammesons brought Royal home.

“All the vets told me this horse might recover—might,” said Danielle. “But that if he does, he’ll never be more than pasture sound. He’ll be a lawn ornament for the rest of his life.”

The Ammesons began a rigorous program of medication administration, chiropractic and therapeutic laser treatments, weekly massages and special shoeing. Royal remained on stall rest or limited turnout for another four months and antibiotics for six months as follow-up ultrasounds showed the pockets of infection in his tissues slowly closing up. Danielle began long lining him and walking him in a Pessoa training system to help him recoup some muscle. By April, it was time to take the next step.

“I decided, ‘I’m just going to get on and see what happens,’ ” Danielle said. “And he was fine. We just walked around my mom’s house and up and down the road. We also didn’t force him or rush him into doing anything he didn’t feel comfortable with.”

Eventually Danielle tested out his trot. It was uneven but not lame, just incredibly weak. So she made a tentative plan to bring him back into training. She’d see how far she could get, and even if it didn’t work, what did she have to lose?

“We picked up right where we left off,” she said. “I’d shift my weight a little, and he’d move sideways. He never forgot his training.”

In April 2018, they reentered the show ring at training level, and last year they completed a full show season at first level. They earned three silver medals in the American Warmblood Society and Sporthorse Registry Year-End Awards and three USDF All-Breed champion medals. They also qualified for USDF Regionals again in 2019. This time it was just Danielle and Laura. No trainer, no caravan of friends, just the three of them. It felt like redemption.

“Honestly, I really thought there was no hope [for a competitive career],” said Morton. “I thought it was a long shot that he would become pasture-sound and be able to enjoy some light trail riding. Royal is an amazing horse with amazing owners that enabled his recovery. Oftentimes we don’t have the opportunity to see this outcome because this treatment is very expensive and many horses would develop laminitis in the opposite limb or other serious complications. If they are treated successfully to overcome the infection, they are often not provided the progressive rehabilitation that Royal was provided. When we see this success, it gives us hope for some of these horses that have overcome infection but are still not able to return to performance.” In 2020, Danielle hopes to

compete at second level and qualify for USDF Regionals again. Whatever they accomplish, however, it’s their relationship that means the most.

“I think their bond is unbreakable,” said Laura. “When he sees her coming to the barn, he’s clearly just looking forward to her.”