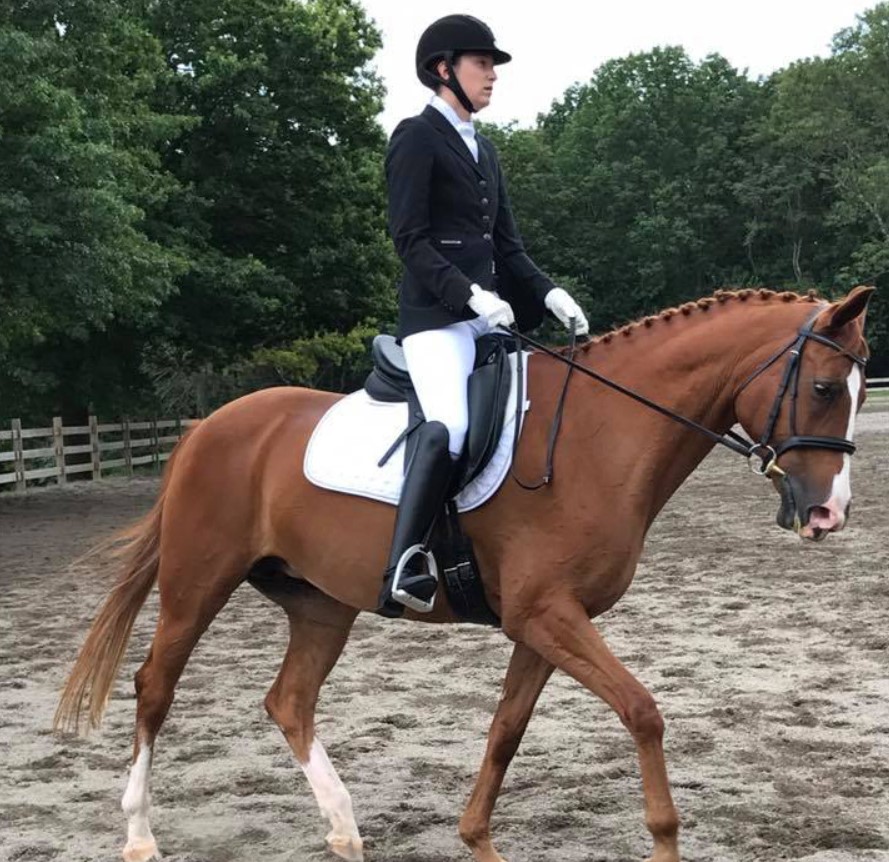 Lying in the dirt at a hunter schooling show in Lake Ariel, Pennsylvania, on Labor Day Weekend 2015, Kelly Smith had a lot to contemplate, even more than the average rider who watches their horse gallop away after dumping them on course. She hit hard—first with her back, right where she’d undergone a lumbar fusion in June of 2013, then with her head, where she’d had required surgery for a Chiari malformation in February of the same year. It was exactly the kind of fall that can undo years of recovery, the kind that keeps many riders out of the tack altogether after major surgeries.

“I started out just wiggling my fingers and toes,” she said. “I remember thinking, ‘Ooo! I think they still work! I think all the surgically repaired parts held!’ ”

Smith overcame her fear of falling at age 11 when she first started taking lessons. As “the poor kid at the barn,” she had to learn to ride whatever her trainer had, and he didn’t have many school ponies.

“I rode for a really cool but kind of crazy guy who would get in lots of off-the-track Thoroughbreds,” Smith explained. “He would get them from a race on Friday, bring them home on Saturday, jump them around, then take them to the horse show on Sunday. Literally! All the other kids had their own horses, so it was always like, ‘Oh, Kelly will ride this one!’ ”

Smith got her first horse at 16 and has clung to ownership ever since. She attended a local community college so she could afford to keep riding through school and supplemented her half-scholarship by retraining off-the-track Thoroughbreds. After earning her English degree, buying and selling OTTBs became her profession.

“In five years, I did 25 or 30 flips,” Smith said. “I developed a close friendship with a track person who bred Thoroughbreds in Belmar, New Jersey, and she would send me a picture, usually not even a good picture, and I’d be like, ‘Yeah, I can take it!’ She had a really terrible farrier at the time, and the horses kept having minor tendon issues, which I could rehab pretty easily. So I’d bring them home, give them their time off, then put 30, 60 or 90 days on them, depending on the horse, then sell them.

“You have to have a strong stomach, though,” she said. “Because of my background riding everything as a kid, I knew I could get along with anything, and I knew I wasn’t afraid.”

Smith married and moved to a small farm in Scranton, Pennsylvania, where she could work with her projects at home. She loved the training, but not the selling process, so she tried running a boarding facility for a couple of years while working part-time at a veterinary clinic. Again, she found herself unhappy with the public relations side of running a horse business, but she couldn’t get enough hours at the clinic to get by without it.

So she found something in the middle: a full-time gig at English Riding Supply.

“I started out in customer service and moved up through the company. Now I’m in marketing,” Smith said. “I love my job. I get to travel and meet like-minded people from all over the world, making contacts I never would have had.”

One of Smith’s favorite projects has been overseeing the redesign of ERS’s saddles. She was on her way to the saddle factory in Argentina in 2012 when she first started experiencing vertigo.

“At first I just kind of figured it would go away,” Smith said. “I tried aspirin, rest, put myself out to pasture for a while. But I just couldn’t shake it. Finally, I said, ‘OK, maybe this is something to worry about.’

“I went to the doctor, and they said, ‘Oh. You have a Chiari malformation pressing on your brain stem. You need brain surgery,’ ” she continued. “And I was like, ‘OK, I guess that is something to worry about!’ ”

Smith had undergone surgery once before, in 2007, when one of her lungs deflated for no apparent reason. But that procedure was nothing compared to her Chiari decompression operation in February 2013. Doctors removed a portion of the back of her skull to relieve pressure on her spinal cord. The procedure went well, but she still spent the next six months on what she called “mandatory stall rest.”

Since she was out of the saddle anyway, she finally looked into some chronic back pain that had plagued her since her teens. In June, she had her lower spine fused.

Before her diagnosis, Smith had been working a new project, Shangri-La, a feisty Hanoverian-Thoroughbred cross who was nearly unrideable when Smith got her. One of Smith’s friends had sent “Opal” to a series of trainers before throwing up her hands and offering her to Smith.

With patience, positive reinforcement and plenty of treats, Smith brought her around.

“I was finally getting somewhere with her when I found out I needed brain surgery, so I was pretty bummed,” Smith said. “It was around Christmas time, though, and you see all these stallion semen giveaways, so I thought, ‘Eh, why not?’ and entered one for an Oldenburg, Legaczy, on a whim. Well, I won it! So I bred her during my year out of the saddle.

“That was my first foray into breeding, and I got really, really lucky,” Smith added. “I wanted more height and more power behind and got everything I wanted and more. Now that I know a lot more breeders, I know that doesn’t happen often.”

Smith and Opal took the rest of 2014 off. But when she brought Opal back into work the following spring, the mare didn’t feel like her usual self.

They went to a few local shows before the fateful Labor Day Weekend when Opal landed off a single fence set on the quarter line in an adult equitation class and took off bucking, sending Smith into the dirt for her first time in nearly a decade.

Once she confirmed all her digits still functioned, Smith couldn’t help feeling a little smug—as smug as you can feel with arena dirt in your breeches.

“This is a horse that never needs to be schooled, hardly needs a warm-up, always jumps around for me no problem,” Smith said. “As soon as I came off, my husband at the time came running out and said, ‘OK. I believe you. Something’s wrong.’ And I said, ‘Um, yeah!’ ”

Opal didn’t show any signs of lameness, just general malaise. So when Smith brought her to Pine Bush Equine in Pine Bush, New York, her veterinarian, Herb Burns, VMD, suggested testing her for Lyme. The results were positive.

“She had to do 60 days on oral minocycline, which was hard to get in her because she stays fat on air and doesn’t eat grain,” Smith said. “But, for as hungry as she is, she doesn’t like things mixed in her food, so she was pretty sure I was trying to poison her.”

By the time Opal recovered, Smith’s home arena was blanketed in snow. Once it melted, Opal had lost so much muscle between Lyme, foaling and time off that Smith didn’t think she was ready for jumping.

Instead, she decided to try dressage.

“I thought it would be like physical therapy for her,” Smith said. “I never really liked flatwork—it was just the means to the end. But as an adult who has had several major surgeries, I figured it might be worth a try for both of us!”

Smith started taking dressage lessons with Canadian Olympic eventer Samantha St. Jacques. She imagined after a few months she’d return to hunters. A year later, she was still in a black saddle.

“As a kid, I was never taught to feel the nuances of horse or rider. I just thought about survival—get on this horse, jump around, don’t die. But I’m very Type A, very perfectionist, and I found myself really liking it,” Smith said. “It’s definitely made me more aware of riding every stride and how much your body can influence the horse.”

With Opal finally back on track, her colt “Demon” just started under saddle, and Smith’s own body in stable condition, Smith set her sights on her first purely personal goal as an adult rider: a U.S. Dressage Federation bronze medal.

But in the winter of 2017 she found herself on the mend from another unexpected blow: divorce.

“It’s still a bit of a mess, to be honest. It was a total blindside shock,” Smith said. “I got married right out of college and was never totally on my own, so it was a massive change. I kept the horses and two donkeys at our house, so I was moving myself and moving them—and as a total horse girl, I was way more worried about moving them than myself!”

Smith spent most of 2018 trail riding, too emotionally spent to maintain a consistent training regimen. But by the start of 2019, she felt ready for more. She didn’t have the money to keep both horses boarded after the divorce, so she free-leased Opal in order to focus on Demon

“It’s a little sad, because I don’t love riding him as much as I love riding the mare,” Smith said. “I like them a little spicy and a little weird, which she totally is, and he totally is not. But he’s 5, and she’s 16, so it just makes more sense. I’m 37 this year, so when he’s a good horse in about two to four years, I’ll be 40 and probably really appreciate his quiet, Labrador-like, gelding nature.”

Smith hopes that after her bronze medal, she can apply what she’s learned in the sandbox to the hunters again, with an eye toward jumpers if her gelding is game. It’s harder now—financially, without a place of her own, and physically, as her headaches have started to return, indicating she’ll need a follow-up surgery soon.

But no matter what comes her way, she’ll be in the saddle.

“Horses are just a part of my life, and they always will be,” Smith said. “A lot of people that have my condition are horrified when they hear that I ride, but I say don’t ever let anyone tell you that you can’t ride. Find a doctor; find a support system that will say, ‘Look, it’s going to take some time, but you can do it.’“I always said to boyfriends in college, ‘Horses were there before you, and they’ll be there after you,’ ” Smith concluded with a laugh. “Well, that’s turned out to be true in more ways than I would have liked, but that’s OK, too!”