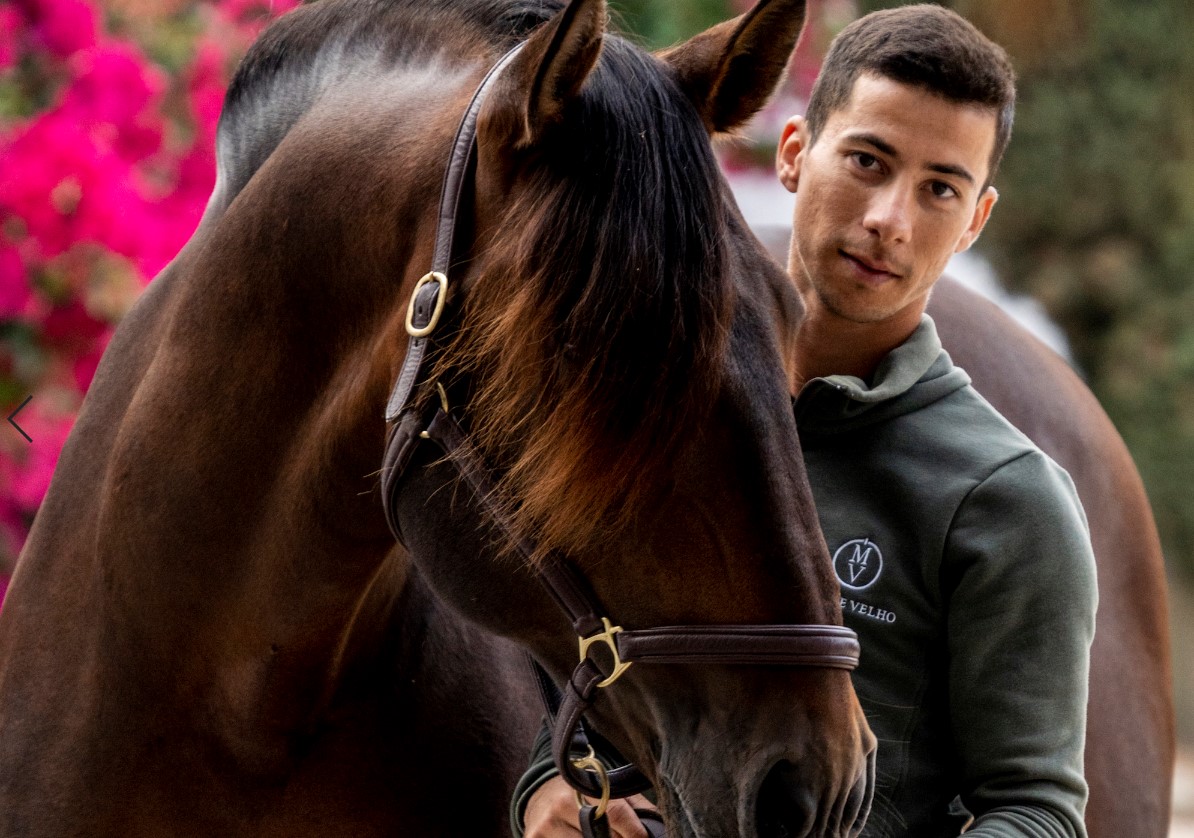 A Bright Future for Portuguese Dressage

This year, four riders took Portugal to the next level in international Dressage by winning a team place in the 2020 Tokyo Olympics.

Although it’s not the first time Portugal has competed – with great riders such as Daniel Pinto, Carlos Pinto and Miguel Ralão competing as individuals in Beijing 2008, Gonçalo Carvalho as a single entry in London 2012 and in much earlier days several military riders performed – this is the first time a full-team qualification has been achieved.

João began working at Monte Velho when he was 15 years old on a summer internship programme and fitted in so well that he was invited to join the team.  Together with Equador, they have shared a journey from knowing very little to competing on the International stage – very impressive for two so young!

It was João that started Equador and trained with him from the beginning. He told me that Equador is a very fun horse to ride and at work is focussed and intelligent.  About 4 years ago the director of Monte Velho, Diogo Lima Mayer, spotted their potential and made the decision to bring on-board a trainer that could work with the pair 3 times a week.  This was the game changer.

With Coralie´s guidance, the partnership developed and recently they had the opportunity to take   João and Equador to train with Carl Hester in the UK. João told me this has been an amazing experience, getting to learn so much from one of his greatest inspirations.

Since then he is enthusiastically introducing new ideas to his training programme and daily activities for Equador.  Equador´s weekly training programme is 2 days out hacking in countryside 4 days in the arena working mostly on the basics and maybe one or two exercises each session.

Like Maria Caetano, João has several horses to develop and he prefers to do everything himself from grooming, grazing, hacking and training.  He wants to develop a strong bond with each horse and there is no doubt that he has achieved this.  He is currently ranked 71st in the FEI Dressage rankings.

At Monte Velho, they have a very specific breeding strategy preferring to have just 5 mares. Each year they carefully select Lusitano stallions that most compliment each mare and potential for Dressage competition.

This is working out really well for them, to date they have produced some excellent horses that have been sold Internationally for Dressage. The mares and foals live in a wide open landscape with many hectares of gentle hills to roam, cork oak trees for shade and a lake for water and bathing. Not sure you could image a better start for young horses!

Duarte Nogueira has been working in the Alter Organisation for 35 years beginning at their sister farm Companhia de Lezirias. His daily life at the stud is backing and training young horses, preparing them for competition or selling.

He loves Dressage and to compete but he does not come across as hugely competitive. He told me he never imagined he would become an International Dressage Rider and be one of the ones to qualify the first Portugal team.  He is an incredibly modest man committed to his daily routine and I had the impression he was slightly in awe at the possibility of going to Japan next year!

Beirão AR is a huge grand stallion that has such a noble presence even when he just standing in the grooming area you feel his peaceful energy from quite a distance away.

While I stood beside him I was struck by what a great shoulder and neck he has. There is an intense feeling of the ancient breed about him – a war horse, the gentle giant. He appears that nothing would ever faze him, indeed Duarte confirmed this by telling me he is such a brave and willing horse he never says no to anything, he’s never afraid and always wise.

We watched Duarte working Beirão in the arena for such a big horse he is very elastic and light when he is moving.

There is an impressive family behind Beirão, like Coroado AR he is the son of Rubi AR the highest scoring Lusitano ever in the Olympics.  In fact the Alter Stud has an impressive track record with their horses. A majority of the Lusitanos that have made it to the Olympics have AR bloodlines – 3 out of the 4 horses qualified for Tokyo have AR lines.

Rubi AR owned by Christine Jacoberger is the highest scoring Lusitano in an Olympic competition. Guizo (deceased) bred by Fundacao Eugenio de Almeida owned by Yeguada la Lira y la W was in the silver medal team for Spain in the Athens 2004. A son of Guizo, Zingaro de lyw was in the Brazilian team in the Rio 2016.

Beirão is approved for breeding and is already the sire of many horses.

Francisco is also the driving force behind the competition programme for the Alter horses, it is a tribute to his ambition for their success that has seen these fabulous horses, the owners and sponsors to make such significant strides in the evolution of the breed.

The future is looking very bright for the young riders in Portugal and the Lusitano Breed. With quality horses, better training, greater support and global interest opening more opportunities there is so much to look forward to. The interest in the Lusitano horse has sky rocketed in  popularity attracting equestrian visitors from all corners of the globe to try and buy the horses. This all contributes to the strengthening of the Portuguese economy and the further evolution of the Lusitano breed.

All sport / competition images are credited to Rui Pedro Godinho