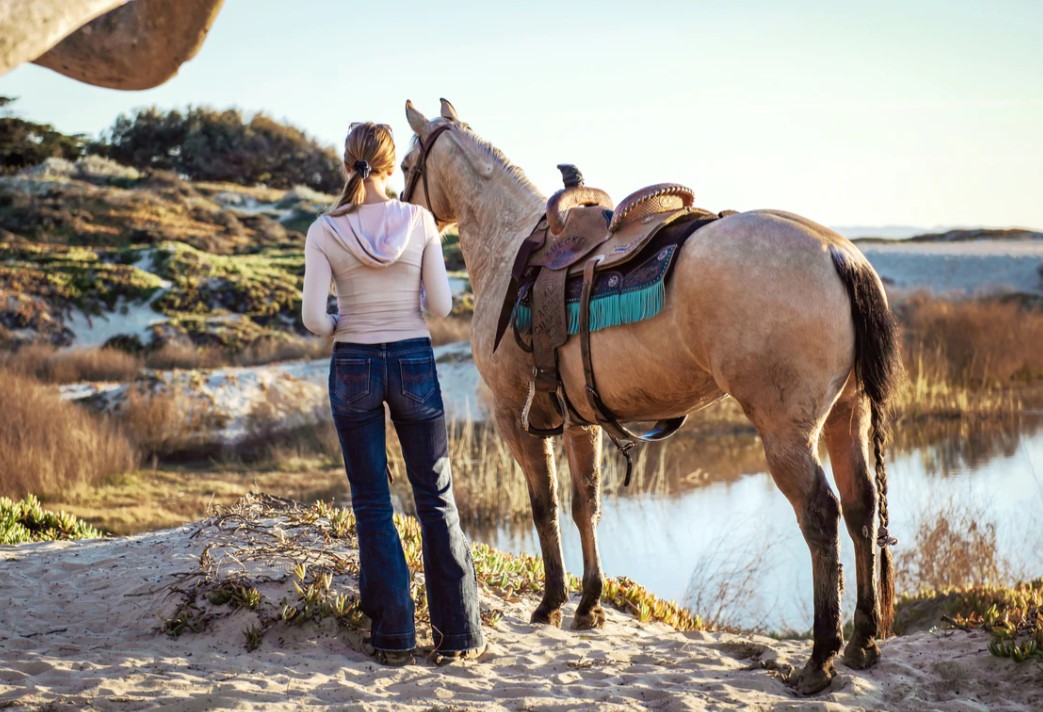 Lost and found in America

A pamphlet I read in a truck stop described this part of New Mexico as “where the Great Plains meets the Rockies.”

The stretch of road from Tucumcari to Albuquerque was described as “featureless” in the brochure, but whoever wrote that was missing so much. Riding my horse Rain Dance (Rainy) at a slow walk, I noticed the muted shades of rock and plant life. I felt the ever-present breeze, getting cooler by the day. We crossed paths with roadrunners and antelope. On this journey, my dog Gypsy has developed a skill for flushing out jackrabbits hidden to me until their sudden burst of movement.

We’d been traveling on a composite of three roads: old Route 40, Route 66, and Route 54—the secondary road my animals and I had been following for months. In Santa Rosa we came upon a split, marked with a collection of signs.

I jumped from the saddle and pulled out my map, laying it open against Rainy’s side. Route 54 took a deep dive south, all the way to Mexico. Route 40 continued west with 66, going along with it for a while.

We were going west. The decision of direction should have been easy enough. Still, it felt like I was severing a tie somehow. We’d been on or near Route 54 since early summer, back in Missouri. It had taken us through farmland, small towns, and high prairies.

I looked at the faded signs and the windswept road, then climbed back in the saddle. I liked that we’d been on the same road for so long. It made me feel like my animals and I were still connected somehow to all the helping hands and kindness of the Midwest.

I turned around and looked forward at Route 66, the worn old road in  front of us, heading to where the sun set. I clucked to Rainy, and we stepped onto the shoulder, saying goodbye  once again.

The road wound upward into high hills. If it hadn’t been for the sun, I’d have worried we were getting turned around, veering from the direction I wanted to go.

The summer heat was gone, replaced by pleasant days and cool nights. The downward dip in the temperature brought out the snakes: In the mornings they sunned themselves on the pavement. Vehicles were a rarity; it was just my animals and me, passing the rattlers carefully as they unfurled their long bodies on the road, soaking up the lingering warmth it offered. The animals and I grew used to seeing them in this sluggish state.

I spied a windmill ahead, which meant water. As we got closer, I could see a house, too—the first one in a while. The conditions underfoot deteriorated when we turned onto the track leading toward the structures. Both appeared ancient and dry, like they’d grown there in the sand. What looked like bundles of twigs dangled along the edge of the low roof of the house. I thought they might be herbs and mesquite hung to dry. The door was open a crack. “Hello?” I called.

No one came. No dogs barked.  Abandonment hung in the air. I turned toward the windmill. There was just enough breeze to turn the blades with a slow, faint creak. It was on the other side of a barbed-wire fence, the line of posts and wire spreading far in each  direction and out of sight. What appeared to be dozens and dozens of  rattlesnake skins, and jackrabbit and coyote pelts, were draped along the fence, baking in the sun.

I considered our need for the water that might or might not be in the stock tank near the windmill. It was unappealing to think of ducking under the skins, hanging there like a macabre laundry line, but I did it anyway, grimacing. I was relieved to find my reward. I filled our collapsible bucket quickly.

As I got back on Rainy, the breeze picked up a little. The windmill turned lazily for a few seconds, and the skins on the fence blew in a strange dance. I sat unmoving—we all did—as if our  silence was a part of the place. Then  we turned back to the road and kept moving on.

Our time alone together on the stretch of road that passed south of Albuquerque deepened the special connection I had with my animals. I spoke only to them, and they seemed to listen. However, the isolation wore me down a bit, making me wish for human contact and a little friendly conversation.

After several long, lonely days, we  arrived at a feed store outside Grants. The owner had left a bale of hay for us near the horse pens, along with a few apples and sandwiches next to the  empty horse trailer where Gypsy and  I were welcome to sleep that night.  It was a simple thing, but it made  me feel a little better that someone knew where we were.

I expected to have mail waiting for me, care of General Delivery, at the Grants Post Office. Though I was conserving my money, I also hoped to restock our meager supplies in town and try to find something warm to wear now that cooler temperatures had arrived. I called to Gypsy and started the walk to Grants.

As luck would have it, there was a thrift shop, and I paid only 25 cents for a heavy wool turtleneck sweater. With the warm sweater, a hot meal in my belly, and a pleasingly heavy sack of mail to read, I felt a lift in my spirits as we walked back to the feed store. There was a cool, clear feeling in the air, and I put my hands in my pockets. I didn’t need the autumn leaves of home to remind me that fall had arrived and change was in the air.

As the evening turned colder, I threw a little more hay to Rainy. I crawled inside my sleeping bag on the floor of the horse trailer, pulling the top of the bag over my shoulders to keep warm as I read my mail by the light of my lantern. Letters described what was happening back home: A favorite hangout was closing. Two of my close friends were getting married, and with some of my mail weeks old, the weddings were happening soon.

It was a bit shocking to think of all that was going on without me. “We wish you could be here,” my friend Kevin wrote, knowing that I’d still be traveling when his wedding took place. I was thousands of miles away, lying on the floor of a horse trailer in the middle of the high desert.

Gypsy stirred beside me. A few seconds later I heard the cry of a coyote. I pushed the mail aside and laid my head down, my thoughts restless. Turning over, I lifted my head to look out the trailer’s back door, staring at the patch of stars visible in the cold, clear sky. I listened for the coyote again, but all was quiet.

The old man and his cowboy hat

My feeling of separateness stayed with me as we rode out in the morning light. The wind had settled a bit and the sky was clear as we followed an old frontage road somewhere west of the town of Thoreau. I saw a figure way off in the distance, but it took some time to reach an elderly man, standing still, watching us. I reined Rainy to a stop next to the man, and my horse lowered his head, waiting in his gentle way for the man to reach out and pet him.

“Name’s Bill,” the old man said.  “I’ve seen you on the news, and I been out here, watching for you.” I smiled  at him, thankful for the friendly gesture.

“Fine, fine,” he replied, brushing it off with a wave. “I saw you on the TV and saw how you said people are being real nice to you, so I wanted to give you this.”

I noticed a cowboy hat in one hand. He held it up for me to see. “A lot of stories are in this hat,” he informed me. I could see it was well-worn, faded from days in the sun, the hatband stained dark. I didn’t really want a cowboy hat, but I wanted to be gracious. When he held the hat out to me, I reached down from Rainy’s back to take it.

He nodded his acknowledgment, looking serious. “I just want to know why you didn’t do The Big One.”

“Pardon me?” I replied, puzzled.

“Why aren’t you riding The Big One? North to south? Canada to Mexico? Riding east to west is the easy way.”

The easy way? I studied Bill and decided he was what my mom would kindly call “a little off.”

“My son, he might ride The Big  One someday,” the man said, ignoring my question. “That’s what he talked about, a ride like you’re doing. Only the hard way.”

The old man nodded, staring off into the distance as if he could see something we couldn’t. “My son can ride. I taught him to ride. He grew up on a horse.” I sensed grief or regret in the old man. I wanted to say I was sorry but didn’t even know why.

“Don’t be in a hurry now,” Bill  insisted, looking at me intently. “Wait a bit.”

Rainy was starting to fidget, bored with standing on the side of the road. Gypsy sat quietly as the old man rambled on about his son and some things I couldn’t quite hear or understand. I once more mentioned that we’d better go, but Bill again asked me to stay a  bit longer.

The old service road had been empty all afternoon, but now a brown sedan drove into view and stopped behind our little gathering. A man got out of the car and approached us, notebook in hand —a reporter.

This intrusion bothered Bill, who interrupted the reporter’s questions to tell him that his son would be doing the Big One someday. When the reporter mildly brushed him off, the old man said goodbye and turned to leave.

“Thank you for the hat!” I called to his retreating back. I wanted to think of something else to say, something kind, something that would matter to him as he walked stiffly along the dusty road, but the words failed to come.

I knew why he’d stayed talking so long, why he hadn’t wanted me to ride on. He wore his loneliness like an old shirt; his aloneness far outweighed mine. I hoped maybe it was a little lighter for having found us.