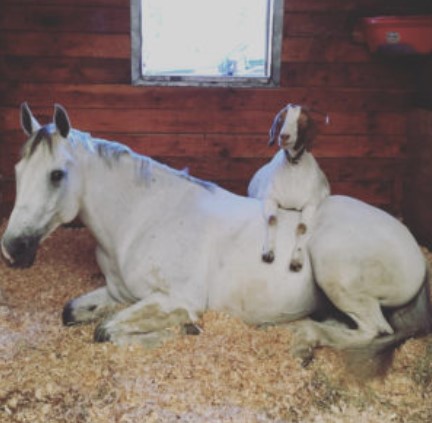 There’s a lot to not like on social media. And then there’s the delightful friendship between a horse named Coaster and his “emotional support goat” Buttercup. The duo have a devoted following on the popular platform TikTok, where short videos chronicle their day-to-day adventures and mutual love of gummy worms.

Coaster, an 18-year-old Thoroughbred gelding, has competed on the West Coast Hunter Jumper circuit for years. When he was young, he competed in the International Hunter Derbies with professional rider Shelly Kerron and in the Adult Amateur Hunters with his owner, veterinarian Jennifer Sparks. Coaster’s faithful companion, Buttercup, is a female Boer Goat estimated to be about 10 years old. Both are stabled at Legacy Hunters & Jumpers in Woodinville, Washington, and their daily lives are chronicled on Instagram and, more recently, TikTok. The accounts were created and run by Leah Raphael, a rider at the same farm.

“Before Coaster met Buttercup he had extreme anxiety issues,” says Raphael. “He was super talented and behaved when he was being handled or ridden, but would pace, weave, and get very anxious if he was alone. At this point he was at a farm in Oregon, and the staff tried a ton of things to make him more comfortable but nothing worked.”

When the head groom at the farm heard that goats are good companion animals, he bought Buttercup from a goat farm. The friendship between Coaster and Buttercup did not blossom immediately. “Coaster initially…was very apprehensive,” says Raphael. “The staff slowly increased their exposure to each other, but what really convinced Coaster was when Buttercup started to bond with other grey horses—he got jealous and they’ve been best friends ever since!”

Raphael started an Instagram account for Coaster and Buttercup in 2016, sharing pictures of the pair snuggling in the stall together, or hanging out in their paddock and even posing together for winner’s photos at shows. “They definitely behave like an old married couple,” says Leah. “They’re very affectionate but we can tell they get into little arguments, usually about food or if Buttercup accidentally pokes him with a horn. They spend their days together and are only apart when Coaster is being ridden.” Ironically, Buttercup is now the anxious one and yells for attention when the separated from the gelding.

Coaster and Buttercup had a respectable following on Instagram, but the video format of TikTok, with trending songs and audio clips, proved the perfect platform for the quirky pair. Since March of this year, the account has accumulated nearly 23,000 followers and is closing in on one million “likes.”

“I’ve had a ton of fun making their TikTok videos,” says Raphael. “I really love how the platform fosters creativity and how engaged and positive the community is. Similar to when I started their Insta, I’m on a career break and had some time on my hands and I’ve really been enjoying the creative outlet.”

Most of Coaster and Buttercup’s followers seem to be horse people, says Raphael, but the pair have broken through to a wider audience with a few of their videos. “You can definitely tell when a video makes it to a more ‘mainstream’ audience because the comments start comparing them to Shrek & Donkey or Lupe & Ferdinand (both very valid). I think the story of their friendship is universal so definitely something a lot of people can relate to, regardless of their background.”