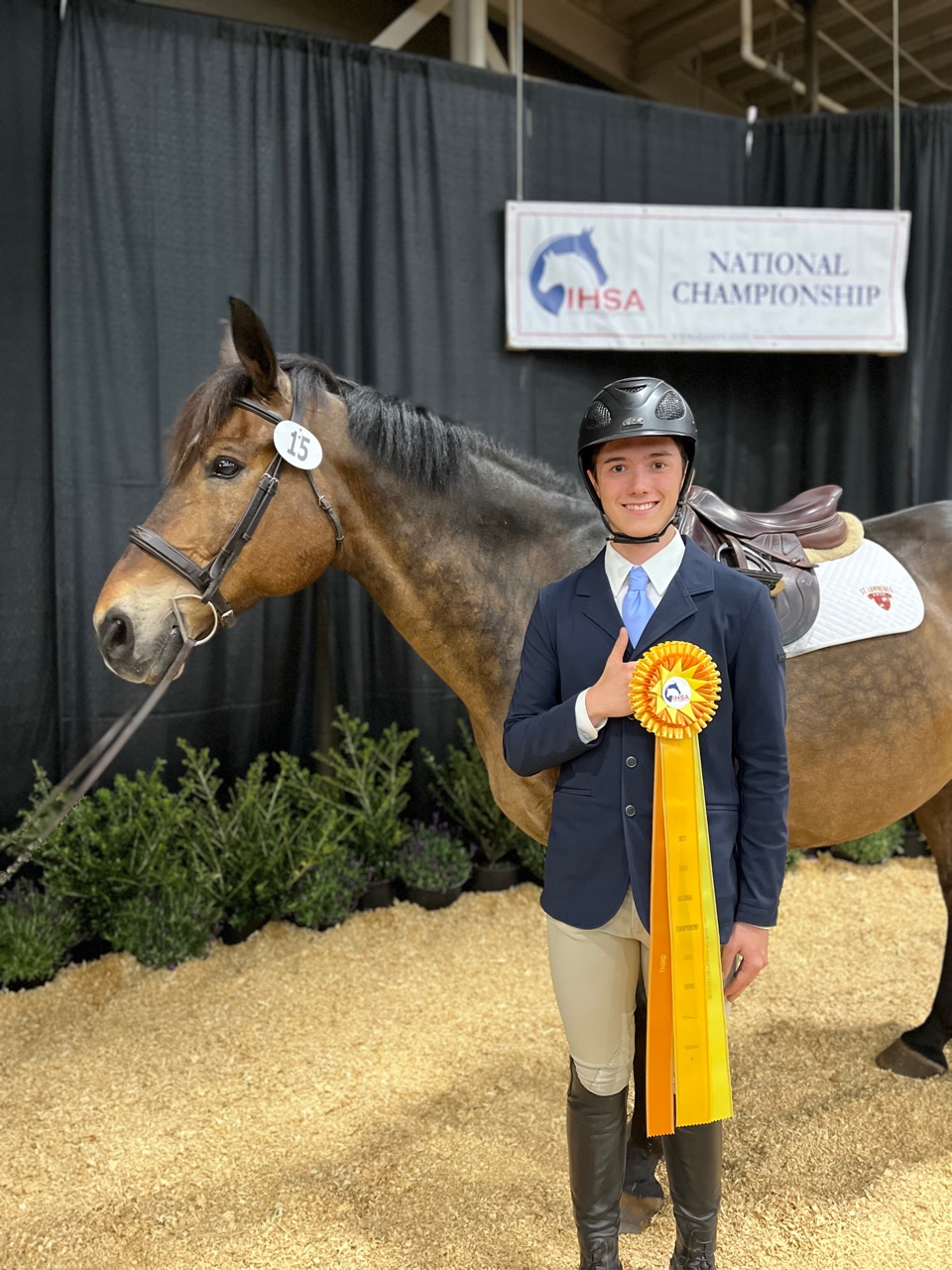 This September I walked into Stanford’s Freshman Activities Fair knowing exactly what team I wanted to join: the Alpine Ski Team. Growing up in France, I began skiing at the age of 5, and I have been racing for the last 7 years, so I was sure that was the team for me. But as I was looking for their table, another grabbed my eye across the way—I saw athletes from the Stanford Equestrian Team with ribbons and a saddle, so I asked them about riding. I hadn’t sat on a horse in years and I had no real formal training to speak of apart from a few lessons here and there. The team assured me that I didn’t need show experience, since they needed at least one rider for the Introductory division (i.e. a rider with fewer than 24 weeks of instruction, and I certainly fit the bill).

I went to walk on tryouts with almost 50 prospective riders; to my surprise, I was one of ten who made the team. My occasional rides over the years notwithstanding, I had to learn everything from scratch (I am chagrined to admit that I used to grip the reins between my thumbs and pointer fingers!). Riding several times a week in practice, my riding got better and–the best part–I was able to meet and spend time with some of the most kind and welcoming people I’ve ever met. I practiced my diagonals, sat the trot, spent what seemed like hours in the two-point, and rode every imaginable horse, from Ebony the dressage pony to Duke the Belgian Draft. Eventually, I competed in what turned out to be my first and only regular season show this winter, as our season in California was cut short by a scary EHV-1 outbreak that closed down competition across the state.

Despite our shortened season, the Stanford team won our 15th straight Intercollegiate Horse Show Association (IHSA) Regional Championship. To my astonishment, my coaches selected me to be the one rider to represent our team at the IHSA Zone Finals. Even though this meant I would spend spring break on campus training instead of heading off to the mountains to ski, I was honored to have been chosen. I found myself riding three horses a day, plus trying to comprehend yoga and other cross training, as I spent all day, every day, with the other seven athletes who were headed to the finals. I quickly came to realize that my team could make anything fun. Even yoga.

We were all thrilled to compete at the Zone Championships, and I took 2nd in my second show ever, but the win only ramped up our practices. Three weeks later, we finally made it to Harrisburg, PA, for the IHSA National Championships, and I felt excited and ready to compete … but we arrived on Tuesday, and I didn’t compete until late in the day on Friday! My teammate summed up the atmosphere perfectly: “Hurry up and wait!”

While the time leading up to our competitions feels long (especially since we acutely feel our jet lag at 6 a.m. every morning), everyone always has something to do as we watch warmups and study the field of completely unknown horses. In addition, our team helped care for the horses from Cornell (who traveled from New York with just their two kind coaches and one individual rider–also an Introductory rider), as the IHSA relies on the generosity of dozens of colleges and owners from up and down the East Coast to provide the 90 horses used at the National Championships.

Once the competition begins, a routine emerges: each athlete draws, and we look up the notes we have on the horse with the coaches and riders strategizing the best way to ride each horse. During the class, our team sits rapt with attention, silently cheering for our teammates until we watch them line up and await with bated breath our rider’s number over the loudspeaker, before quickly making our way over to congratulate or console them if things didn’t go quite as planned. Thursday seems interminable with class after class running non-stop into the late afternoon, but I am getting the hang of understanding what the judges are looking for. When we finally get back to the hotel at night, we are all exhausted, but before we go to sleep, we play a few rounds of a card game together to try to relax as we laugh and take a break before going back to the barn for night check. These moments are some of the biggest highlights of the trip.

As I waited to compete on Friday, with stress slowly building, I tried to think of these joyful moments, as I came to the realization that, unlike skiing, where adrenaline is used to get tight and strong, I had to figure out how to remain composed and calm. When I finally drew Chandler, a lovely horse from Centenary University, I mounted and my coaches helped me with my stirrups. My teammates gave me last words of encouragement, and I walked into the ring. The next seven minutes went by very quickly, and by the time I dismounted, I was happy with my ride. I nailed my diagonals and managed to find space in the ring with 15 others.

I didn’t own the breeches, the boots, or the hunt coat I was wearing–they were all borrowed from teammates and alums–but I hoped I had done everything I could to make them proud. With such a competitive class, I really didn’t know what to expect. It was my third time ever showing, and my first time on a horse I didn’t know. But as I waited for the results, I thought about why I had taken a week away from classes, and flown all the way across the country, to spend less than 10 minutes in an arena for a sport I just picked up this past fall. When I looked across the arena and saw my entire team waiting for the results, cheering me on, I had my answer in the realization of how much respect and admiration I have for my team, the cherished time we spent together helping with horses, the many random fits of tired laughter, the coaches’ endless optimism, and the contagious joyful spirit of Stanford’s Equestrian Team (although hearing my name called in 3rd place wasn’t so bad either!).