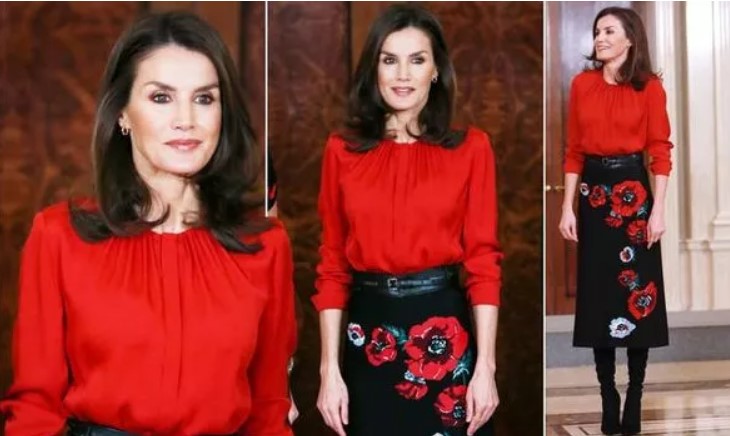 QUEEN LETIZIA OF SPAIN, 47, put on a bold display in an eye-catching recycled red shirt and floral skirt while in Madrid today.

Queen Letizia of Spain turned heads as she wore a bright red long-sleeved shirt today. The royal stepped out to attend several audiences which took place at Zarzuela Palace in Madrid. She completed the look with a recycled black floral skirt and black knee high boots.

Queen Letizia of Spain turned heads as she wore a bright red long-sleeved shirt today. The royal stepped out to attend several audiences which took place at Zarzuela Palace in Madrid. She completed the look with a recycled black floral skirt and black knee high boots.

The garment had a loose fit and Letizia gave it a casual feel by rolling up her sleeves.

She showed off her svelte figure with a fitted black high-waisted skirt, from Carolina Herrera, with similar designs costing £476. The black pencil skirt had a floral design with an embroidered poppy across it and held it up with a black leather belt. The garment cut off just below her knees and showed off a pair of knee high boots.

The slouchy black boots had a suede design with a stylish thin high heel. The Spanish monarch accessorised the look with a gold oval ring and a small pair of gold hoop earrings. Queen Letizia wore her short brown locks down and styled in a bouncy blow-dry. She opted for casual make-up look with a brown lipgloss and lashings of mascara. Last week, Letizia made her first public appearance after taking a break over the Christmas period.

She joined her husband, King Felipe VI, as the attended Spanish army celebrations at the Royal Palace in Madrid. Every year in January, the Spanish Royal Family commemorates Pascua Militar, a military ceremony. For the glamorous occasion, Letizia opted for a floor-length blue tuxedo dress.

Queen Letizia showed off her slim figure with the dress that had a wrap design that pulled her in at the waist. The stylish garment had a v-neckline and large slit down the side of the skirt. She finished the look by wearing a pair of navy blue stiletto high heels. Queen Letizia of Spain: Five facts about the Spanish royal

Letizia was already famous in her native Spain thanks to a career as a TV presenter and journalist. She even won an award for best Spanish journalist under 30 in 2002, just before she met King Felipe.

Felipe and Letizia Ortiz, as she was called then, wed in 2004. She wore a long-sleeved wedding dress with a 15 foot train by Manuel Pertegaz. As is custom with royal weddings, Letizia wore a tiara. Her diamond and platinum Prussian tiara is a German imperial heirloom created in 1913 by Koch for Princess Victoria Louise of Prussia’s wedding to Prince Ernst August.

Letizia is the eldest of three daughters, with her middle sister tragically taking her own life in 2007. Now, Letizia has two daughters, Leonor, Princess of Asturias and Infanta Sofia of Spain. She is a hands on mum, taking the children to school and enjoying countless family holidays with them.

Letizia has been married before, wedding Alfonso Guerrero, a teacher, in 1998. However she did not require an annulment before her roman-catholic marriage to then Prince Felipe in 2004 as her marriage to Guerrero was a civil ceremony.

In 2008, Letizia underwent surgery on her nose to correct a respiratory problem, the Spanish palace confirmed at the time.