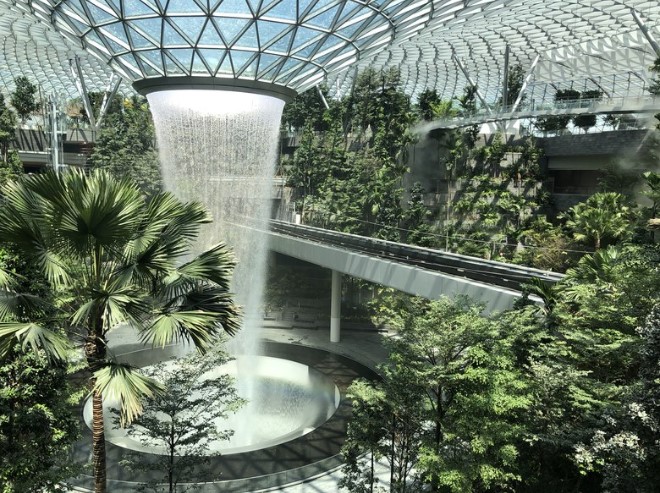 Inside the World’s Best Airport

Air travel can be quite the grind, with outdated terminals, underwhelming food at overwhelming prices, and ample opportunities to see people without shoes on. Then again, most airports aren’t Singapore’s Changi. For a record-breaking seventh year in a row, the Asian travel hub has been rated the top airport in the world by Skytrax, a customer service reviewer that has been ranking airports since 1999.

What catapults it to the top? Perhaps it’s the rooftop pool with a jacuzzi, or the multitude of gardens: orchid, butterfly, sunflower, cactus, water lily, and “enchanted,” just to name a few. Or maybe the movie theater, XBox 360 station, or kinetic art installation of 1,216 aluminum and copper raindrops. Then there’s the food—so much food! Dozens of gourmet restaurants, six expansive dining halls including one that specializes in Singaporean street food, and one Hello Kitty Orchid Garden Café. That is, if travelers even need to waste time eating. Stores are all around, like Saint Laurent, Hermès, and not one, not two, but three different Adidas shops. (Also, this writer can attest the Zara has an excellent selection of dangly earrings that everyone assumes are expensive, and you’re like, Hah! They’re from an airport Zara!)

It doesn’t look like Changi will relinquish its crown anytime soon. This April, they open the Jewel, a new retail and entertainment complex with the world’s largest waterfall, a hedge maze, and a Yotelair hotel. Asia also claimed the title for second, third, and fourth best airport, with Tokyo’s Haneda Airport, Seoul’s Incheon Airport, and Hong Kong Airport following Changi in the rankings.

The best American airport? That’d be Denver, which came in at number 32. Yes, that means that the U.S. didn’t even crack the top 30—which is unsurprising to. . . anyone who has ever been to an American airport.