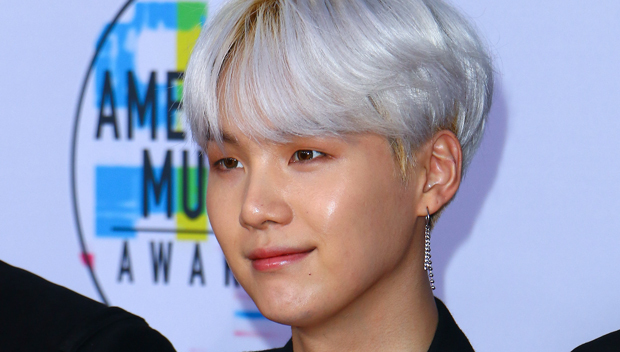 BTS has been conquering the world with their current tour. But it’s been taking it’s toll on Suga, as his injured shoulder has been flaring up with pain. The band does such intense choreography and he’s been doing his best to keep up. But at a recent performance at their muster, he was seen rubbing his right shoulder in pain while in the middle of a song and the video has gone viral, causing the BTS Army to give so many well wishes for him to feel better that it began trending in the top 10 on U.S. Twitter.

“Thank you for giving such an amazing performance despite of not feeling well, Yoongi. You are truly the best! Praying for your speedy healing,” one fan tweeted while another wrote. “Min Yoongi you truly deserve world, you work so so hard to show the best results, you never show you’re hurt and just keep going with excellent performance, I’m amazed by your professionalism, hope you’ll feel better asap.” Yet another added “”Yoongi is so strong, i hope he takes care of himself and rests. He’s so amazing for not once even complaining about his shoulder ): he really is the best.”

Suga injured his shoulder in a motorbike crash before joining the BTS but has done everything to keep up with the rest of the guys in their performances. The band just finished up their muster — a.k.a a massive fan meeting where they give a special performance — in Busan, Korea and their Army members have noticed that the 26-year-old was in a lot of pain. “Yoongi has been having shoulder pain for a while yet he still does his absolute best to give us his best performance :(( i really hope he rests a lot since muster is over now :(.” one fan tweeted.

Suga revealed the story behind his injured shoulder during an April 4 ‘BTS: BURN THE STAGE‘ of Youtube Red Originals. Jimin brought up his injury from falling down stairs but Suga answered, “I told you guys that I fell down but I actually had a car crash.”  RM asked, “Why? And how?” Suga responded “I had the accident when I was delivering on a motorcycle when I got hit at the intersection.”

“When I opened my eyes, I could see the wheels right in front of me, right in front of my eyes. I got drawn under the car. The next day I couldn’t move my shoulder because it was dislocated. And it got more serious,” he explained, “I couldn’t tell the truth because I was afraid the company might fire me. But later when I told them, the company paid for my tuition.” RM responded with sympathy, telling him “Wow, that was the story. I was curious what on earth the lyrics ‘holding my smashed shoulders’ meant,” referring to his song “The Last.”