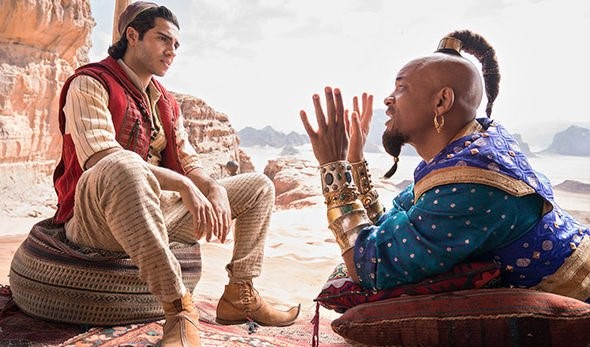 ALADDIN premiered brand new footage featuring everyone’s favourite genie, played by Will Smith. But who else is in the cast of the live-action Disney remake?

Disney fans have been waiting a long time for Aladdin to make its way to their screens. The movie was announced back in October 2016 but was swiftly mired in trouble when filming had to be pushed back. At last night’s BAFTAs, Disney premiered brand new footage starring Will Smith as Genie – which sparked a big reaction from fans.

Starring as the eponymous character Aladdin in the upcoming Disney remake is Mena Massoud. For the purposes of the live-action movie, Aladdin is an Agrabah thief who is smitten with the Sultan’s daughter Jasmine, played by Naomi Scott. Scott said of her character: “She’s a multidimensional woman and she doesn’t have to just be one thing.”

Will Smith takes over the mantle of Genie, who was voiced by Robin Williams in the original 1992 animated movie. The Genie is a comical Jinn who has the power to grant three wishes to the owner of his magic lamp. Marwan Kenzari plays Jafar, the evil sorcerer and the Grand vizier of Agrabah. Jafar is also the chief advisor to the Sultan but is secretly concocting a plot to unseat the Sultan and rule Agrabah for himself. And how else will he do this but by capturing Genie from Aladdin, of course.

Navid Negahban plays Jasmine’s father, The Sultan, who is preoccupied with finding a suitable husband for his daughter Jasmine. New characters to the movie include Dalia, played by Nasim Pedrad, as Princess Jasmine’s loyal handmaiden and confidante. Controversially, Billy Magnussen was cast to play another new character – Prince Anders. Anders is a suitor from the kingdom of Scanland, which was invented for the purposes of the live action movie. The addition of a white character, especially in such a prominent role, drew criticism. Finally, Numan Acar plays Hakim, Jafar’s right-hand man and head of the palace guards.

The Aladdin live-action movie will be a new take on the traditional story, with a non-linear plot and the aforementioned new faces.